Home>Articles>Conditions>Deep Vein Thrombosis (DVT) and Pulmonary Embolism (PE): What You Need to Know 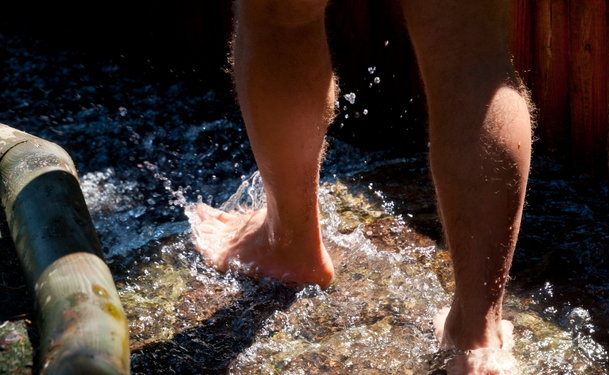 Deep Vein Thrombosis (DVT) and Pulmonary Embolism (PE): What You Need to Know

Deep vein thrombosis (DVT) refers to the formation of blood clots in blood vessels deep within the body. Most cases occur within the vessels of the thighs or lower legs, but they can also occur in other parts of the body.

Unlike more superficial clots, DVT clots can break away from the vessel walls and travel throughout the bloodstream. These clots can pass through the heart and into the lungs, where they can cause a serious, potentially life-threatening condition known as pulmonary embolism (PE).

Pulmonary embolism (a sudden blockage of a lung artery, usually caused by a blood clot that has traveled from the leg, though they can also come from the arm, abdomen, or pelvis) can damage the lungs and other organs and can lead to death.

Deep veins are located near the bones and in the muscles, and they carry all the blood on its way back to the heart, like major rivers or waterways. The muscles squeeze them and help push through them. Superficial veins are closer the surface of the skin in the fatty layer. Blood flows more slowly through them, since they're not squeezed by muscles.

How is deep vein thrombosis diagnosed?

Symptoms are not diagnostic for DVT and may resemble other medical disorders. To confirm a DVT diagnosis, medical tests are required.

Blood test: The majority of individuals who develop a DVT or PE have an elevated blood level of a clot-dissolving substance called D dimer. However, D dimer levels are also increased in other medical conditions and the test is not very specific. At present, the test is used to identify individuals who are at risk for recurrence of DVT.

Duplex ultrasound: This non invasive painless test can rapidly identify if there is a clot in the leg. It can also determine the size and location of the clot. However, the test cannot determine if there is a blood clot above the groin area and pelvis.

MRI: MRI is never the first test of choice. If a blood clot is suspected in the pelvis or groin area, MRI is an excellent modality. It is painless and does not expose one to radiation. It is slightly more expensive than ultrasound.

Venogram: Venogram is a rarely performed test today. It requires the injection of a dye and radiation exposure. With the availability of ultrasound and MRI, venogram is only done when these 2 tests are non diagnostic.

Treatment for deep vein thrombosis is generally aimed at:

One of the most common first approaches is the use of drugs called anticoagulants. More commonly referred to as blood thinners, these can keep clots from growing larger and can also help prevent the formation of new clots.

Certain blood thinners can cause excessive bleeding — an uncommon side effect that may be life threatening. Patients treated with those drugs are monitored through regular blood tests to ensure the blood is still able to effectively clot following an injury.

In an emergency, certain powerful medications called thrombolytics can be delivered intravenously or even directly into the clot. They can only be administered to patients who are hospitalized, usually in the intensive care unit.

If you cannot tolerate anticoagulants or other blood thinners, or if you are already being treated with blood thinners but still form clots, your doctor can surgically insert filters to prevent the clots from reaching the lungs, should they break away.

Many DVT sufferers are also prescribed compression stockings, tight-fitting hose that help maintain effective blood circulation in the lower legs and help keep clots from forming. You often have to use these for at least two years after DVT.

Up to half of people who have been treated for deep vein thrombosis develop another condition called post-thrombotic syndrome (PTS). This serious condition can cause aching, pain, swelling, itching and skin discoloration in the affected leg. In some cases, slow- or non-healing wounds (ulcers) may form.

Doctors are not exactly sure what causes PTS, but think it may be due to ongoing inflammation and damage caused by the blood clot. There is no cure for PTS, so your best option is to prevent it from happening.

Graduated compression stockings are the main way to prevent PTS. These apply pressure to the leg to help push blood in the veins toward the heart. The stockings are tightest around the ankles and gradually looser toward the knee and thigh.

Stockings are usually worn for two years after treatment is started for DVT. Some studies have shown that this can reduce your risk of developing PTS by up to 50 percent. Graduated compression stockings may also reduce symptoms of DVT, such as swelling.

If you have DVT, your doctor will talk with you about whether graduated compression stockings are a good choice for you. Stockings come in varying “strengths” that apply different amount of pressure. They are available as thigh-high or knee-high stockings. Your doctor will let you know which is the most appropriate type for you.

What are the symptoms of DVT?

About half of people with DVT don't have any symptoms at all until the clot breaks away. The other half have some early-warning symptoms indicating presence of a clot:

In a few individuals the first sign of DVT can be the chest pain associated with a PE. The warning signs and symptoms of a pulmonary embolism include:

Who is typically affected by DVT?

Clots that lead to deep vein thrombosis tend to form because one of three things happens:

The specific factors that increase one's risk include:

How common are blood clots after surgery

How can DVT be prevented?

One of the best ways to prevent blood clots and DVT is to incorporate physical activity into your day. You don’t need to start running marathons, but as little as half an hour of exercise can make a big difference. Other ways to incorporate activity include:

Other ways to prevent blood clots or DVT include:

The precise number of people affected by DVT/PE is unknown, although as many as 900,000 people could be affected (1 to 2 per 1,000) each year in the United States.

James Stewart, Heavy D, and David Bloom died of pulmonary embolism. While Jimmy Stewart was able to live to his “elder years,” both Heavy D and David Bloom were taken during their prime. It’s unfortunate that venous thromboembolism rarely gets press until those in the public eye are afflicted.

While media attention of DVT/PE is improving, a phone survey of over 1000 people revealed the following about public awareness of DVT: