SINCE I EMBARKED on learning more about venous disease over ten years ago, I’ve been impressed by how much we have yet to grasp. This fascinating field is subject to the same foibles that exist elsewhere. Groupthink and expert opinion (argumentum ab auctoritate) are just two examples.

Over the past year, several interesting studies have shed new light on our understanding of and approach to chronic venous disease. Here are some notable examples.

Many patients with venous insufficiency have both deep and superficial reflux. Vascular Quality Initiative data on 4881 patients undergoing endovenous ablation were evaluated by Brown et al. Both groups (those with isolated superficial and those with combined superficial and deep vein reflux) improved post-ablation. However, the group with combined reflux showed a greater overall reduction in venous clinical severity score (VCSS), though they appeared to experience higher complication rates, including thrombus extension.1

A randomized control trial of 117 patients with venous in- sufficiency compared thermal to mechanochemical ablation (MOCA). At 3-year follow-up, the GSV occlusion rate by thermal ablation was 100%, versus 82% by MOCA. In the MOCA arm, GSVs with diameters greater than 7mm were more likely to remain patent. Quality of life score improvement, however, was equivalent.2

Some payers in the U.S. deny approval for an ablation procedure based on size criteria for the diameter of the GSV or the absence of junctional reflux. Attaran et al. evaluated 242 patients who prospectively underwent GSV ablation as part of the VeClose study and compared outcomes in patients with GSV diameters <5.5mm versus ≥5.5mm. At up to 3 year follow-up, there was no difference in VCSS improvement between the two groups. In fact, GSV diameter poorly correlated with symptom improvement.3

Aurshina conducted a retrospective evaluation of 265 ablation cases at a single center and found no difference in outcomes, whether there was saphenofemoral junction reflux or not.4

Iliac Stents, When to Use

The indication for stenting in iliac vein obstruction has received increased attention over recent years. The VIDIO trial prospectively enrolled 100 patients with C4-C6 venous disease, of which 68 were stented based on imaging findings. The study demonstrated the increased sensitivity of IVUS to venography for the detection of venous stenosis. It also reported >54% to be an optimal lumen area stenosis threshold by IVUS to intervene. Clinical outcomes to stenting, however, were disappointing. At six months, only 41% had VCSS improvements of >4 points. In fact, 7.3% had no change, and 13.2% had worsening of VCSS.6

More recently, Jayaraj published a thought-provoking retrospective study on iliofemoral stenting. Their findings appear to suggest that, after stenting, patients with apparently less severe (<50% area) stenosis appear to improve just as much as those with >50% area stenosis. When present, ulcer healing rates were also not significantly different between those groups.7

There clearly remains more to be learned in identifying what constitutes clinically significant stenosis and who will benefit from an iliac stent. 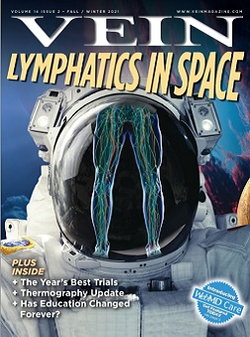