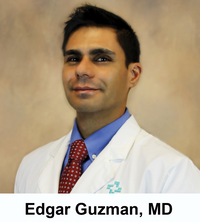 Mr. S. was a 67-year-old male whose venous pathology started during the third decade of life. At that time, he presented multiple instances of unprovoked bilateral lower extremity deep venous thrombosis (DVT) and pulmonary embolism (PE). He was initially treated with anticoagulation, but due to the recurrent nature of his disease, he underwent placement of an inferior vena cava (IVC) clip and was placed on lifelong anticoagulation with warfarin.

Dr. Thom Rooke: Although the patient was initially treated more than 30 years ago, the approach taken for his recurrent DVT remains consistent with the approach recommended in modern guidelines. Today, as then, first-line therapy for DVT/PE consists of appropriate anticoagulation. If anticoagulation cannot be tolerated (due to bleeding or other side-effects, as occurred here), or if thrombosis recurs despite adequate therapy, mechanical interruption of the vena cava to prevent PE is appropriate. This is almost always performed today by placing a permanent or temporary IVC filter, but prior to the development of these devices, caval interruption was often achieved using a caval clip of the type described here.

Over the years, he struggled with bilateral lower extremity post-thrombotic symptoms, with multiple cycles of ulceration and healing to either gaiter area. These were managed with wound care and compression, mostly in the form of Unna boots. For maintenance, he predominantly used thigh-high 30-40mmHg graded compression stockings. Although he had a few instances of what appeared to be superficial thrombophlebitis, he was successful in avoiding any major thrombotic issues. 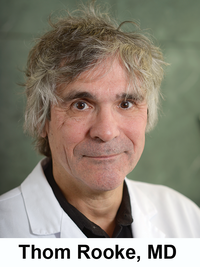 TR: Vena cava plication, using sutures or clips, is surprisingly well-tolerated in many patients, despite the obvious burden placed on venous return from the lower extremities. In a 1967 paper from Johns Hopkins, the most common “late” morbidity from caval interruption was “edema” in 71%, and only 40% of patients with edema were severe enough to require compression stockings. Amazingly, almost one-fourth of patients undergoing caval interruption were asymptomatic at long-term follow-up.

Unfortunately, the paper from Hopkins also points out that many patients do, in fact, go on to develop significant chronic symptoms following caval interruption. In this report, many of them followed the course taken by this patient, with one-third experiencing recurrent phlebitis and 17% developing leg ulcerations.[1]

Mr. S. worked as an ambulance driver and had, on occasion, brought patients to my office for venous pathology. He self-referred for evaluation. At the time, he was experiencing daily swelling with pain and skin irritation. He was finding increasing difficulties with carrying out his work and reported sensations of tightness and pressure to his lower extremities with ambulation, suggesting venous claudication. Physical exam confirmed fairly symmetric swelling and stasis dermatitis with scattered and unimpressive varicosities. There were scars from prior ulcers, but no active wounds.

TR: The patient displays signs and symptoms consistent with severe venous disease caused by caval obstruction. In this situation, the observation that his varicosities were “unimpressive” may be significant. In the setting of chronic venous obstruction, large visible varicosities typically form, in part, as collateral vessels that function to circumvent the blockage. The lack of prominent varicosities noted here may indicate that the patient is intrinsically (perhaps on a genetic basis?) unable to remodel or develop the collateral veins needed to relieve his venous congestion.

A non-contrasted CT scan of the abdomen was obtained to ascertain the type and location of his IVC clip. The implant was identified as a Miles clip, still in its intended position and without compromise of adjacent structures.

TR: Assessing the relative contribution made by chronic venous obstruction versus valvular incompetence is always problematic when both conditions coexist. Although the combination of duplex ultrasound and CT scanning (as performed here) is generally sufficient to 1) confirm the presence of obstruction/reflux, and 2) localize it to specific vessels, it still remains unclear whether (or to what extent) the patient’s venous problems are due to obstruction, incompetence, or both. This remains an area where improvements in venous testing, especially physiological and/ or functional testing, may prove useful. 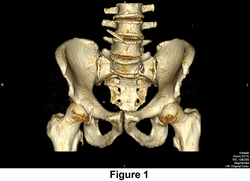 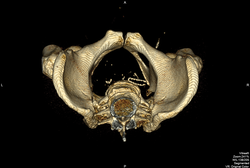 FIGURE 1. Miles clip prior to intervention

With the above information, the patient was classified as C5ESAD,SPO,R. Even though he had disease at multiple levels, I felt his most significant issue was obstruction of the deep system at the IVC, and also suspected iliac vein compromise. I planned on venography with recanalization of the IVC clip. A review of the literature and conversation with my senior partner, who had direct experience with this type of implant, confirmed that the clip was maintained in closed position by a suture-ligature. I thought it would be possible to break this suture and thus release the clip via balloon angioplasty.

Amazingly, in some cases, correcting obstruction by stenting may actually reduce the severity of associated venous incompetence in limbs with both obstruction and incompetence.[3]

I approached this reconstruction with the patient in the supine position, under general anesthesia. Access was obtained through bilateral femoral veins. Venography and intravascular ultrasound (IVUS) confirmed diffuse bilateral post-thrombotic changes, including the iliac segments. Bilateral Lunderquist wires were placed onto the superior vena cava.

With an appropriately sized thoracic aortic stent graft available for IVC repair in case of rupture and hemorrhage, I proceeded to perform serial balloon angioplasty of the IVC at the area of the clip. 12mm, 16mm and 20mm balloons were used, and sequential venograms and IVUS images were obtained. These demonstrated progressive luminal gain.

TR: Some vascular surgeons are more fearless than others!! 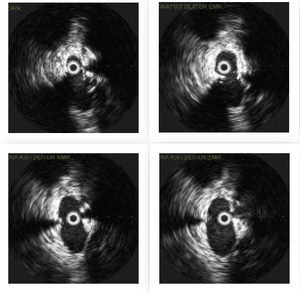 After this was complete, I introduced a 24x70mm Wallstent just above the IVC bifurcation and went on to place two 18x90mm Wallstents across the diseased iliac segments, from the proximal common iliac vein onto the common femoral vein on either side. The IVC bifurcation was reconstructed using 20x50mm Cook Z-stents. The Z-stent on the right side was deployed first and successfully bridged the iliac and IVC stents. The Z-stent on the left side was modified by removing the proximal constraining suture as to allow intercrossing of the struts with those of the right-sided stent.

This sequence of deployment of the Z-stents, where the left stent prolapses into the right stent, results in a more favorable configuration than when the reverse approach is used. This is due to the anatomy of the IVC bifurcation. The right common iliac vein continues onto the IVC with minimal angulation, while the left common iliac vein intersects the two at a more acute angle.

The left common iliac vein was quite dilated; this resulted in significant foreshortening of the Wallstent placed, as it was expanded by the Cook Z-stent. Even though the Z-stent bridged the IVC and iliac stent, in retrospect, insufficient overlap was obtained. 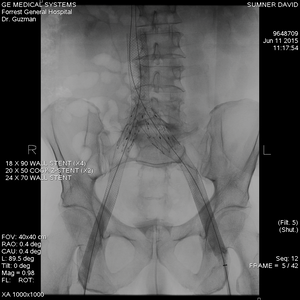 TR: To the seasoned interventionist, the decision to use stents in this situation may seem obvious, but as a procedurally-naïve, conservative, non-interventional vascular physician, I find myself asking, “Was stenting really necessary?” In the multidisciplinary practice in which I work, the use of stents—either for the newly-opened vena cava or for the iliac veins that were noted to have “diffuse bilateral post thrombotic changes”—is highly selective. The decision to stent a vein, as opposed to using simple angioplasty alone, is based not only on the degree of anatomic narrowing (as seen with CT, ultrasound, IVUS, etc.), but more importantly on physiological characteristics such as pressure gradient across the lesion or the venographic assessment of flow.

Due to the limited space available for this presentation, the iliocaval images and, if available, hemodynamic measurements have not been presented. This makes it difficult to independently assess the severity of obstruction. However, the author notes that “the left common iliac vein was quite dilated,” which raises the possibility that post-thrombotic obstruction, at least in this vessel, was not severe. Perhaps the patient’s symptoms would have improved and the inflow would have been adequate to maintain iliocaval patency after simple angioplasty of these vessels?

A 20mm balloon was used to post-angioplasty the IVC stent, and a 16mm balloon was used across both iliac segments. After completion images were obtained, wires, catheters and sheaths were withdrawn. The venotomy tracts were closed with Flowseal and a cutaneous suture. The patient awoke from anesthesia uneventfully and had an uncomplicated overnight observation.

Mr. S. did well after the procedure. His stasis skin changes improved, as did his swelling. His symptoms attributable to venous claudication resolved and he was able to resume his work. Mr. S. also started playing basketball, after many years of being unable to do so.

Approximately one year after the intervention described above, Mr. S. returned to the clinic with recurrence of left lower extremity swelling and pain. He was ruled out for DVT to that limb. Patency of his stents was demonstrated via ultrasound as well. 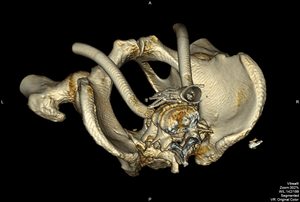 Note: “wishbone configuration” as the clip is held open by the Wallstent

Examination of a recent CT scan, obtained for unrelated reasons, suggested disjunction of the left-sided Z-stent and common iliac vein Wallstent. He agreed to undergo endovenous revision from a femoral vein approach. 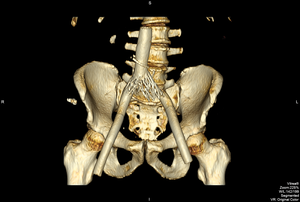 Venography and IVUS confirmed separation of the stents, with an area of high-grade stenosis, which in turn induced in-stent stenosis across the entire iliac segment, as the flow channel equalized to the narrowest point. I proceeded to perform repeated balloon angioplasties with an 18mm balloon to regain luminal diameter and bridged the gap between stents with a 22x70 Wallstent. 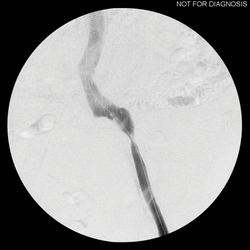 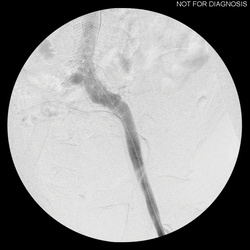 Mr. S. did well after this second intervention, with resolution of his recurrent symptoms. Going forward, he will remain on warfarin indefinitely as he had been before. He continues to comply with graded compression stockings, and may decide to transition to knee-high length. At present, there are no plans for further venous intervention.

TR: In the never-ending vascular war between the disruptive forces of nature and surgical ingenuity, this outcome represents—at least for now—a victory for the good guys. But will it last? The potential for further problems (e.g., re-separation of the stents, thrombosis, restenosis, etc.) are real, as are uncertainties regarding the natural history and durability of this procedure, optimal medical therapy (including the need for/duration of/type of/intensity of anticoagulation), value of surveillance, role of elastic stockings/compression, and many others.

This case represents an excellent example of “common ground” upon which practitioners with either non-interventional or interventional backgrounds can converge. For the non-interventionist like myself, there is a fascinating physiological mystery here. How can some patients with complete iliocaval obstruction – including those with a surgically-occluded cava – be asymptomatic while other patients with seemingly identical anatomy are debilitated by their disease? How can we determine which patients should be referred for intervention, and which should not? And for the interventionist (the adventurous ones, anyway), there is an equally compelling dilemma. How can I treat an anatomical problem (like surgical occlusion of the cava) in the safest, cheapest, least invasive, and most effective manner possible? And once I get the veins open, how do I keep them open? Fortunately, vascular medicine and surgery will always have a need for practitioners with either interest.

This case was presented by Dr. Edgar Guzman at the Expert Venous Management course in June 2016.