The Need for Standards in the Treatment of Venous Disorders 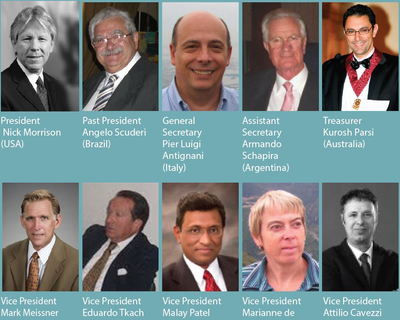 What role can the UIP play in promoting education and research in venous disease? To answer this question it is instructive to first look to a brief history of the UIP and how it is organized.

In 1959 the UIP was formed to further the study and treatment of venous and lymphatic disorders by four founding societies: the Société Française de Phlébologie (SFP); the Phlebological Association of Italy; the Deutsche Arbeitsgemeinschaft für Phlebologie (Germany); and the Benelux Society of Phlebology (Belgium, Netherlands, and Luxembourg).

Since its founding, the UIP has grown to sixty-seven member societies on six continents. Member societies are regional, national, or multinational organizations that have venous and lymphatic disorders as either their primary or secondary focus. The professional backgrounds of the UIP member societies include physicians, research scientists, nurses, sonographers, and other allied health professionals. These individuals share information and applications of science, pharmacology, and medical device innovation through a variety of forums, including biannual meetings, newsletters, and direct or electronic communication.

The UIP is governed according to its constitution. Its governing body consists of two parts: UIP General Council and an elected Executive Committee. The General Council, made up of an elected representative from each member society, meets at each official UIP World Congress or Chapter Meeting in order to elect the officers of the UIP; make decisions regarding the date and venue for the UIP meetings; and determine any changes to the UIP Constitution. 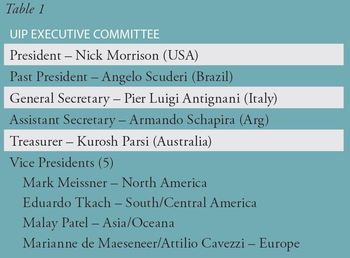 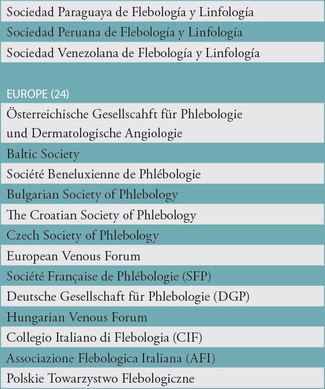 As the first North American President of the UIP, I envision its role as one of strengthening links between member societies, establishing training and educational standards of practicing phlebologists, fostering consensus, and encouraging basic science and clinic research on all aspects of venous and lymphatic disorders.

These goals can be achieved through regional, national, and international congresses; through the encouragement of the creation and development of new phlebologic societies, and thereafter through the recommendation that those societies join the UIP to contribute to the exchange of scientific information and innovation on a global scale.

UIP leadership recognizes the organization’s need to become more responsive to the concerns of its member societies, to facilitate greater ease of communication both within and between member societies, as well as between the societies and UIP leadership. Toward that end, the UIP website is being updated to display all pertinent and current information and to become interactive.

To foster training and educational standards, the Executive Committee has recently authorized the creation of a UIP Certificate of Knowledge. This certificate will be available worldwide; candidates who meet prerequisites will take an examination on computer, based upon a published core content and curriculum from the American Board of Venous and Lymphatic Medicine[1]. Those who pass will be awarded the certificate. This examination is in English and will be available at Pearson-Vue examination centers all over the world.

To say that UIP Leadership has been occasionally uneven over the past two decades would not surprise any UIP observer. My primary goal during my presidency is to put into place mechanisms and systems by which the UIP will increase its leadership role on the international phlebology stage, while discouraging the sort of political maneuvering that can slow the progress envisioned by many well-meaning UIP leaders.

I see the several issues inhibiting our global potential and reducing the effectiveness of UIP member societies: one issue being the low level of awareness of UIP-initiated education and research projects, and consequently the failure to recognize their impact on the global phlebologic community; another being the need for greater dissemination and coordination internationally of phlebologic information and resources in order to promote a greater world-wide understanding of venous disease and the burden that it has on world population.

Additionally, I think the limiting factor for addressing these issues is primarily related to inadequate financial resources. From an international perspective, treatment of venous disease varies in quality and comprehensiveness by location and the available medical resources of local health care providers.

I believe strongly that the UIP can assist the global phlebologic community to meet regional and international challenges in the treatment of venous disease, by coordinating and mobilizing a variety of experiential, human, diagnostic, medical and financial resources.

With this in mind, as President of the UIP, I am proposing the creation of a partner foundation that would generate financial resources to be allocated exclusively to advancing the treatment of venous disease through international investment in education and research. The UIP Foundation would be a stand-alone partner of the UIP. The monies to fund this organization would be separate from the UIP’s financial and administrative resources.

It is my firm belief that such a foundation would ensure direct and measurable impact on the phlebologic community as a whole, and also enhance the quality of patient care for venous disease patients globally.

In the past three years I have been working with key international leaders from the physician and industrial sectors to build a consensus for the UIP Foundation. Following extensive discussions during the UIP General Council meeting in Rome, it was agreed that over the next six months a feasibility study will be conducted, being generously supported by angel investor grants from medi and Medtronic of €30,000 each. When the report is completed, the UIP will then determine whether to move ahead to the planning and governance stages.

A renewed dedication to problem-solving and the tightening of our focus, as well as the securing of funding for research and education, will better equip the UIP to impact the quality of care and treatment for people across the globe who suffer from venous and lymphatic disease.