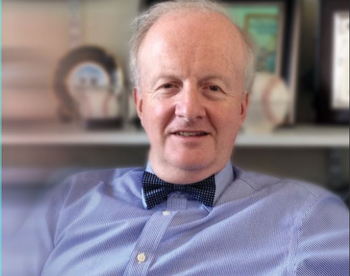 We had the good fortune of speaking with Professor Alun H Davies, who was named as a “Distinguished Fellow Member” at the AVF annual meeting in February.

Professor Davies is one of the U.K.’s premier experts on venous disease treatment. He is well known for his writings about quality of life measures, outcome assessment, clinical trials, endovenous techniques, vein wall biology and deep venous disease, and is heavily involved in the effort for government reimbursement of venous disease treatment. He is the editor-in-chief of Phlebology, past president of the European Venous Forum, member of the American Venous Forum, the American College of Phlebology and the Venous Forum at The Royal Society of Medicine. He is also a member of the Vascular Surgical Society of Great Britain and Ireland, European Society of Vascular Surgery and the Association of Surgeons of Great Britain and Ireland.

Professor Davies is one of the youngest members of the Royal College of Surgeons of England to be awarded Hunterian Professorship. He trained in Cambridge, Oxford, Plymouth, Bristol and Boston, Massachusetts prior to being appointed as Consultant in Charing Cross in 1994. When he isn’t busy tending to his vascular, endovascular and general surgery practice at Charing Cross Hospital, he travels globally and lectures on treatment.

VM: Congratulations on your appointment as a “Distinguished Fellow Member” of the American Venous Forum at this year’s meeting.

AD: I was delighted to be appointed DFM of the AVF. It was an honor to be recognized by international colleagues. I truly enjoyed attending the meeting in Florida along with some of my Fellows.

VM: What was that path that led you to today? Was venous disease treatment part of your training from the beginning or did your practice evolve to include veins?

AD: When a child, I wanted to be either a doctor, barrister (advocate) or a priest. I decided to do medicine as science was my main strength, and I had always admired our own family doctor who used to bribe me with Cadbury miniature chocolates.

I worked as an intern in Oxford for the Professor of Surgery who was a vascular and general surgeon. I qualified as a general surgeon with a special interest in vascular surgery. I did my research degree on vein quality for femoro-distal bypass. Having started my own research program, it focused on two areas: venous disease and carotid atherosclerosis.

VM: You came to Charing Cross in 1994 and have remained there, which is an obvious testament to the institution. Please tell me what brought you to Charing Cross and expand on the culture there. What is it like?

AD: I was head hunted to become a faculty member at (what was at the time) Charing Cross & Westminster Medical School, which has subsequently become part of Imperial College London.

VM: I understand that you travel all over the world lecturing. Are there any profound occurrences during your travels that resonate in your memory that you can share with us?

AD: Visiting numerous countries is very illuminating, and I find that the phlebology world is full of great people working for the benefit of patients. Visiting India is very poignant; it is a country with many fascinating attributes, but it has marked poverty.

VM: You were also a Hunterian Professor at the Royal College of Surgeons of England. Please share some background on this prestigious role for our readers. What was this experience like?

AD: I was awarded this for my work on vein quality for femoro-distal bypass. It was a great honor to be awarded this accolade at a young age.

AD: Editing the journal is a great privilege. When I took on the task, it was being published irregularly and did not have an impact factor. It was a great delight when the journal achieved PubMed status. It has also allowed me to work with and meet many interesting people.

VM: You are extensively published, having written, edited and co-authored 25 books, 72 chapters and 365 peer-reviewed publications, including a recent article in the European Journal of Vascular and Endovascular Surgery titled, “Management of Chronic Venous Disease, Clinical Practice Guidelines of the European Society for Vascular Surgery (ESVS).”

AD: This guideline may well influence clinical practice. One of the key publications that will hopefully influence worldwide practice is that of the NICE guidelines on the management of varicose veins (BMJ and EJVES). I have published numerous clinical trials, including a recent one called the AVULS trial (Annals of Surgery) that showed that concomitant phlebectomy should be performed at the same time as truncal ablation.

VM: In the U.S., the Affordable Care Act is in its first year of implementation and there is concern over the future of reimbursement for the highest quality of care. I understand you are highly involved in governmental affairs with respect to the reimbursement of venous disease treatment in the UK, including recently speaking on the impact of new national guidelines on the management of lower limb venous disease at the Royal Society of Medicine Venous Spring Forum Meeting in 2015. How did you become involved in this?

AD: I initially became involved in cost effectiveness as a research tool, and then while President of UK Venous forum I headed up the writing group on the initial UK guidelines. I was subsequently appointed as Chair of the NICE guidelines committee that published key guidelines in 2013.

The NICE guidelines have influenced practice in the UK and Europe. In the UK, there is a fixed-fee national tariff for treating varicose veins and there has been an increase in the number of patients referred for varicose veins, with the referral recommendation that patients with symptomatic varicose veins should be referred for treatment in the publically-funded health service.

VM: One of the topics of discussion in the U.S. is greater homogeny among the various organizations to better promote the common objective of the best care for vein disease. Given your experience, what are your thoughts on the future of cohesive vein care in the UK and continental Europe with respect to societal cooperation or unification? Does it make sense to form stronger alliances to better coordinate meetings, training and the like?

AD: In Europe, we have established a European College of Phlebology of which I am one of four directors. The college has managed to bring numerous societies together and was instrumental in getting a multi-disciplinary board of the UEMS established. This latter body is part of the EU governmental structure and will in the future coordinate examinations to ensure high standards of care in Europe.

VM: Is there anything I have not asked you that you would like to expand on?

AD: I would like to acknowledge the help of all my past and present fellows and colleagues who have helped in my adventures in phlebology, and to my family who have put up with all of my work and traveling commitments. Phlebology is a great specialty to be involved in and there are many profound research questions still to be answered. Being involved with patients who have both superficial and venous disease is a great challenge.