Now in its 28th year of a commitment to advance vein care, both domestically and abroad, the American College of Phlebology welcomed its 15th president, as Dr. Mark Forrestal, MD, FACPh, succeeded Dr. Melvin Rosenblatt and took the baton for a two-year term of office. 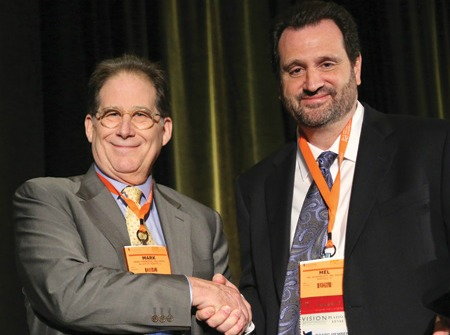 Coming off of a highly active year that saw the ACP host the International Union of Phlebology (UIP) meeting in Boston, develop an EMR-accessible venous registry that compiles patient data in addition to QoL data, establish guidelines for the treatment of superficial venous disease and launch a major public awareness campaign, Dr. Forrestal not only has a significant amount of momentum behind him, but will also play an instrumental role as the ACP’s 2013-16 strategic plan concludes and a new plan is forged. This passing of the baton isn’t coming during a qualifying heat at a heads-up match, but more like on the anchor leg of a 4x1600 at the World Relays.

Dr. Forrestal’s background in treating veins is extensive, as is his involvement with the ACP, where he has held multiple positions since 2000, including secretary, treasurer, president-elect and chairman of the board of the ACPF, and has been a member since 1989. He received his board certification in internal medicine in 1983 and had a full-time practice dedicated to phlebology by 1985, after joining a group practice based in Chicago, where he practiced outpatient compression sclerotherapy, including leg ulcer treatment. In 1990, Dr. Forrestal adopted daily use of duplex ultrasound into his practice and performed DUS-guided liquid sclerotherapy from 1990-2000. In 2000, he began performing endovenous laser ablation after training with Drs. Robert Min, Steve Zimmet and Mark Isaacs. In 2008, he became one of the first doctors to become board-certified in phlebology. In 2014, Dr. Forrestal incorporated microfoam chemical ablation (Varithena) into his practice.

Dr. Forrestal has given multiple presentations of outcome studies—both internationally and at ACP Annual Congress meetings—since 1991, was published along with Min, Zimmet and Isaacs in the Journal of Vascular and Interventional Radiology on the topic of endovenous laser treatment of the great saphenous vein, and contributed to The Fundamentals of Phlebology—Venous Disease for Clinicians in 2004 and 2014. Given his background and commitment to veins, we won’t be surprised if Dr. Forrestal signals the bell lap as he transitions into his new position. It is with pleasure that we had an opportunity to speak with him and get his thoughts on the direction and upcoming directives of the ACP.

Dr. Forrestal, congratulations on your election as president of the ACP. You are certainly following some major thought leaders who have previously held this position. What does the election mean to you and who are some of the past and current leaders of the ACP who have helped mentor and guide you?

Thank you. Yes, many modern important phlebologists have preceded me. As a member of the ACP since 1989 (then NASP), I have had the privilege of meeting every past president and have worked closely with and learned from the presidents since the mid-1990s. In addition, past president Mel Rosenblatt has been a great help in preparing me for my term.

Please tell us how you got into practicing phlebology. Was it a predetermined course, or a specialty that you progressed to during your course of study or residency? Who were your early influencers that supported your passion for the specialty?

One of my mentors from internal medicine had joined a phlebology group and was very excited about his new career in veins, and he encouraged me to join him. I was introduced to the evaluation and treatment modalities that were being used in Ireland. This led to my discovery of a rich set of venous treatment literature, both in the US and around the globe. I learned about the French, Swiss and Irish schools of treatment—at that time based upon physical exam findings. The most influential person for me was Doctor George Fegan, whom I met and had the great pleasure of having long discussions with regarding his sclerotherapy techniques.

The ACP brought to fruition several key initiatives in its 2013-2016 strategic plan last year. Can you expand on these key milestones and what they mean to the future of phlebologists, and share with us some of the challenges in making all of this happen?

The ACP’s mission is the advancement of vein care and, including the UIP meeting in Boston, several initiatives have been achieved. The UIP meeting was the first to be held in the US. After qualifying with a chapter meeting in 2003, the full congress was awarded to the US with the ACP as sponsor. The ACP PRO Venous Registry has been launched with great effort and work by Willy Chi and Marlin Schul. It was realized by the ACP that a registry is a source of venous data and a way for individual physicians to benchmark against others in the field. Public awareness is an issue, as well as physician awareness, and these are areas that the ACP has spent time developing programs to enhance the overall understanding of venous disease. It is quite common to hear from a patient that all adults must have sore legs. The ACP provides its own CME, as it is an accredited provider as a benefit to our membership.

The ACP has been assertive in its efforts to train and equip the next generation of phlebologists, as evidenced in its fellowship program under the direction of Dr. Lowell Kabnick at NYU Langone Medical Center and its preceptorship program, physicians in training scholarship and leadership academy under the direction of Dr. Helane Fronek, to name a few. Can you tell us a little more about these efforts and the roles they will play as the specialty continues to grow?

The next generation of phlebologists is critical for the specialty to continue to mature. Venous disease is a common medical malady and is in need of dedicated, well-trained practitioners. To that end, the ACP has developed multiple opportunities for venous education. In the past, physicians migrated from various specialties to phlebology and had differing knowledge bases. From didactic teaching to preceptorship opportunities, the ACP realized that a more formal and traditional medical fellowship needed to be initiated. Beginning with John Bergan at Scripps, and continuing with Lowell Kabnick, the ACP is making that happen. It is the plan to have multiple fellowships, and a new site is being evaluated. The ACP also has begun a leadership training academy lead by Helane Fronek, with the expectation that we will be able to develop leaders with phlebology knowledge from varied medical backgrounds.

We understand that the courses at the ACP’s new training facility in San Leandro, CA, continue to sell out. Given its success, is there a plan to expand the training facility’s capabilities in the future?

The ACP is excited to have this space in relation to the national headquarters; it will require less staff travel. There are so many educational modalities that need to be explored. This year, the training facility will host a nursing sclerotherapy course, a physician sclerotherapy course, as well as the leadership academy retreat. The ACP has only begun to fully utilize its new space.

The ACP has made great strides in advocating phlebology with the AMA. Can you expand on these past efforts and share some of the college’s upcoming initiatives in this regard?

The AMA initiative has taken several years to unfold. AMA recognition requires that a high percentage of members be national AMA members as well. The ACP has two representatives at the House of Delegates, and they are actively working within the AMA committee structure to advocate for venous disease. Along with the seats on the HOD at the AMA, the ACP has representatives on the committees that define and implement the CPT codes that we all live with and by in medicine.

As the 2013-2016 strategic plan comes to a culmination, can you share with us some of the discussions regarding the next three-year plan? Are there objectives that will carry over that the ACP will continue to focus on?

Education is vitally important to the ACP mission, and this area continues to be a major focus. The ACP encourages its membership to prepare for and take the ABVLM (American Board of Venous and Lymphatic Medicine). Advocating for our membership involves codifying guidelines for the various venous disease presentations, and their treatment is ongoing to update some insurance interpretations that have become dated. Leadership development will remain as an area of intense interest, and public awareness will continue to remain a priority as well.

The ACP’s goals for 2014-15 include, among other things, increased collaboration with other organizations and the re-evaluation of grants offered by the ACP to improve their relevance in the scientific landscape. How successful have these efforts been to date?

Because the ACP has members from a variety of specialties, there are built in possibilities for collaboration. The ACP has had, for some time, a formal reciprocal relationship for presentations at the annual congresses of the AVF and the SVU. Building these relationships is ongoing and involves the world of lymphatic disease and wound care in patients with leg ulcers. Other specialty societies are in active dialogue, with the expectation of interaction with regard to overlapping medical disease processes. Openness to all backgrounds and a strong interest in collaboration are and will continue to be ACP mainstays.

Are there any initiatives of the ACP that are a source of particular pride and/or promise?

The ACP has historically been an inclusive and progressive organization. One area that we are proud of is the growth and maturation of the allied health section. By identifying as important and encouraging the whole of office-based phlebology, the ACP has trained, through its own membership, the future leaders in the areas of duplex ultrasound imaging, nursing and front office support staff. The allied health section has a major role at the ACP Annual Congress, as well as all year long. The ACP knows that all areas of phlebology are important to excellent daily patient care and if training avenues are not available, will take responsibility for the education of all of its members. The ACP has great expectations for its Patient Reported Outcome (PRO) Venous Registry in producing research and evidence-based outcomes that will have an impact on the efficacy of venous procedures and future reimbursement. The ACP is completely invested in advancing scientific knowledge and feels uniquely situated to be a leader in this growing field.