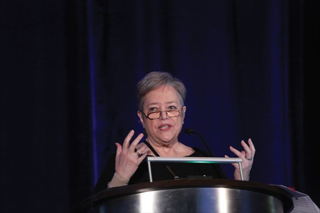 The ACP celebrated three decades at the forefront of venous related education with the Annual Congress, November 3-6, 2016 at the Anaheim Marriott in Anaheim, CA.

This past November, the American College of Phlebology (ACP) hosted what has become the largest and most comprehensive meeting dedicated to venous and lymphatic disorders in the U.S. Under the direction of Program Co-Chairs Carl Black, MD and Kathleen Gibson, MD, the scientific program set the standard with innovative and engaging content, respected faculty from around the world and opportunities for all levels of skill and knowledge.

In addition, LE&RN spokesperson and Academy Award-Winning actress Kathy Bates addressed the conference on the “Human Cost of Lymphedema.” The impassioned talk provided a patient perspective on surviving and managing lymphedema after Bates had breast cancer and underwent a double mastectomy.

Along with the scientific sessions, the Annual Congress also presented sessions to help providers manage insurance challenges, understand the literature in venous disease, deal with ethical issues and learn about credentialing and accreditation.

The Annual Congress curriculum was challenging, but the mild southern California weather provided a relaxing backdrop for networking and engaging with colleagues.

The 10th Annual ACPF Golf Outing kicked off the event on Wednesday with nearly 70 players, representing clinical vein care and industry, all with the goal of raising money for the ACP Foundation (ACPF).

The Foundation also raised money through the Silent Auction, which was held on-site over the course of the three-day conference. Attendees could bid on more than 100 items, ranging from medical devices and services to vacations to sports memorabilia.

For those not at this historic meeting, the recorded content from all three and a half days is available on the ACP’s Online Education Center in December. And, be sure to mark your calendars for the 31st Annual Congress - November 2-5, 2017 at the JW Marriott in Austin, Texas.