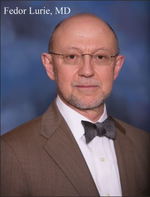 mong the many therapies that were discovered centuries ago, compression therapy survived testing by time, the experience of millions of patients and practitioners, and the critical analysis of scientific evidence. Although specific mechanisms of action and precise clinical indications are yet to be defined, the fact that compression therapy is effective in a variety of patient populations and clinical conditions is quiet obvious.[1]

Similar to pharmaceutical treatments, compression therapy is heterogeneous. It resembles a broad class of medications, with multiple formulations, doses, and regiments. Compression garments include bandages, stockings, Velcro devices, and pneumatic compression devices—each with a variety of individual products with unique characteristics.

The dose of compression—the actual mechanical force applied to the patient’s limb—is unknown for the majority of compression devices. This complexity hampers scientific progress in understanding the mechanisms of compression and in defining its role in management of venous and lymphatic diseases.

Any data that has been generated without knowing the dose of compression that was delivered and the compliance of the patient, should not be considered strong evidence. Patient adherence to compression therapy is another important issue. It includes not only the willingness of a patient to use a device, but also the length of time the device is used, the time of the day, and the type of patient activity.

Recent progress in defining the dose of compression has led to the development of industry standards for compression stockings in some European countries. These standards, however, are based on a single-point measurement of pressure in artificial conditions. The labeling of the stockings’ “class” are therefore imprecise estimates of the pressure that is delivered to one area of a patient’s limb.[2]

“Patient adherence to compression therapy is another important issue. It includes not only the willingness of a patient to use a device, but also the length of time the device is used, the time of the day, and the type of patient activity.”

More importantly, as the limb volume and the mechanical properties of the tissues change with daily activities, limb position, water intake, and many other physiological factors, the pressure delivered by any static compression device changes constantly and significantly. Velcro devices allow adjustment of the pressure but rely on the patient’s subjective identification of the time when this should be done and, for some devices, on patient’s subjective sense of how much pressure should be delivered.

Pneumatic compression devices have the advantage of a known pressure inside the garment. This pressure is not the same as the pressure that is applied to the limb, but is a much better estimate than the “class” of compression stockings.[3] Until recently, pneumatic compression was exclusively used when a patient was immobile, not as the main compression option for mobile patients.

This guarantees a consistent pressure during wear, regardless of changes in limb volume. During times of patient immobility, the device can be switched to an intermittent mode, delivering sequential compression with 50 mmHg of pressure in the foot and ankle area, 45 mmHg in the mid-calf, and 40 mmHg in the proximal calf.

The first clinical experience of using the ACTitouch system was overall optimistic. Patients who decided to use this device showed good control of edema and improved healing of venous ulcers. The initial patient reaction to this device was not always positive. It is heavier and bulkier than stockings and requires some instruction for usage.

Negative impressions usually changed after the first application of the device by the patient. The ease of donning and doffing was an important factor, and experiences shared by other patients using ACTitouch played a significant role in the decision to use this compression option.

“The main advantage of the new device—the ability to deliver known and consistent doses of compression—was challenged by uncertainty in patient acceptance and compliance.” 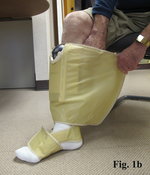 Putting the ACTitouch device on the limb is similar to the application of Velcro devices, but does not require pulling to create appropriate tension (Fig. 1). Most patients feel comfortable wearing this device during daily activities, even exercising (Fig. 2). The aesthetic aspect of wearing a device is a barrier for some patients.

As with any other compression device, there are some patients who do not like it and prefer other options. The main advantage of the new device—the ability to deliver known and consistent doses of compression—was challenged by uncertainty in patient acceptance and compliance.

Fortunately, Tactile Medical made an appropriate investment in research and sponsored a prospective, randomized, multi-center study designed to evaluate ease of use, comfort and treatment compliance in CVI patients, comparing the ACTitouch to a standard compression garment.[4] The results of this trial were reported at the 27th Annual Meeting of the American Venous Forum in Orlando, Florida in February 2016.

In 10 centers that participated in this trial, patients with clinical class 3 to 6, with documented low compliance to compression therapy, were enrolled and randomized to wear either 30 to 40 mmHg graduated compression stockings or a dual action compression device. This device was used in a sustained mode during the day and in IPC mode in the afternoon. Primary outcomes were related to ease of use.

The study results showed that after the first use, patients favored ACTitouch for both doffing and donning. After 30 days, the difference in patient assessment of ease of donning became non-significant; however, doffing was still assessed in favor of the ACTitouch device. During wear, the ACTitouch was reported to be as comfortable as compression stockings.

These findings indicate that apart from esthetic aspects, this device has no disadvantages in patient usage compared to compression stockings. 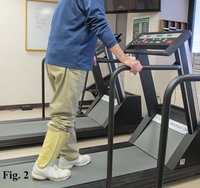 The ACTitouch device has a built-in meter that registers the time of use for the device in each of the two modes. This allowed for the objective measurement of compliance to compression therapy for the first time in a multi-center, randomized trial.

This finding contradicts the results of clinical studies of compliance with compression therapy and at least, in part, is explained by the study environment, where significant educational intervention was followed by a structured follow up and reinforcement.[5],[6]

Edema reduction was one of the secondary outcomes, and the study was not powered to detect a significant difference between the groups. Using water-displacement technique for limb volume measurements introduced another challenge. Many of the patients could not fit their limbs into the measuring device because of significant edema and their body habitus. Those who had consistent measurements showed substantial volume reduction during one month, with a trend favoring the ACTitouch system.

This study’s results confirmed the validity of our initial clinical observations. The ACTitouch system is well-accepted by patients and has a potential to improve patients’ compliance with compression therapy. Introduction of the ACTitouch system gives a new option for patients and practitioners. It will also contribute to our understanding of mechanisms of action and of indications to compression therapy. 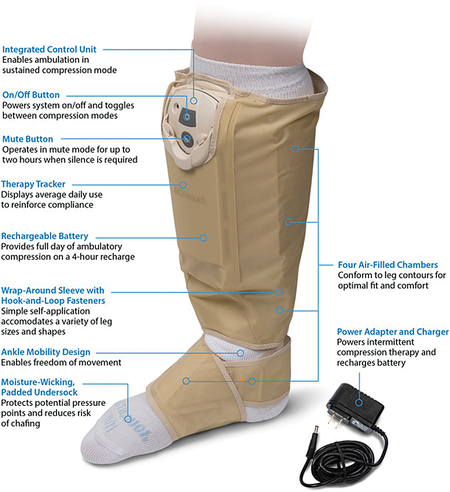