New techniques and updated guidelines have been approved for the Fourth Edition of the Handbook of Venous and Lymphatic Disorders. Renowned as the essential reference of all venous specialists and phlebologists, vascular surgeons and vascular medicine physicians, the handbook covers 300 guidelines for evaluation and management of acute and chronic venous disease, lymphedema and venous and lymphatic malformations.

Updates include recently published guidelines from the American Venous Forum and Society for Vascular Surgery, many of which are joint guidelines. In addition, after every clinical chapter there is an evidence- or consensus-based guideline that is recommended for management of the specific disease covered in that chapter. Each guideline is based on the current evidence which is listed in the chapter by the author and a consensus of the editorial board of the book. 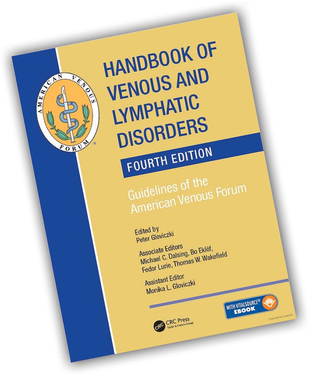 “One very new piece of information is that we have given guidelines to the latest technology that is out there. Specifically, with glue embolization and pharmacomechanical ablation of the saphenous vein,” says Dr. Peter Gloviczki. “All the other guidelines have been updated or upgraded based on the actuated level of evidence.”

Dr. Gloviczki notes that the most important guidelines are that percutaneous endovenous ablations are recommended over surgical treatment in every patient who is a candidate for saphenous vein ablation. “Also, we now do not recommend three months trial compression therapy prior to endovenous ablation, as it is currently mandated by insurance companies, because we believe if the patient is a candidate for endovenous ablation, then that’s the way the patient should be treated and they should not have to go through three months of compression therapy which will not change the situation.”

7. We recommend against compression therapy as the primary treatment of symptomatic varicose veins in patients who are candidates for saphenous vein ablation. (GRADE 1B)

6. We recommend compression as the primary therapeutic modality for healing venous ulcers. (GRADE 1A)

5. Endovenous thermal ablations (laser and radiofrequency ablations) and ultrasound guided foam sclerotherapy are safe and effective, and we recommend them over surgery for treatment of saphenous incompetence. (GRADE 1B)

4. We recommend ambulatory mini-phlebectomy, an outpatient procedure performed under local anesthesia, as an effective and definitive treatment for varicose veins. The procedure is performed after saphenous ablation, either during the same procedure or at a later stage. (GRADE 1B)

3. For those patients who would benefit from pathologic perforator vein ablation, we suggest treatment by percutaneous techniques over Subfascial Endoscopic Perforator Surgery (SEPS). (GRADE 2C)

1. For prevention of venous ulcer recurrence, we recommend ablation of the incompetent superficial veins over compression therapy alone. (GRADE 1B)