This article is based on research provided by North Carolina State University, School of Engineering. It was initially published in a well-respected engineering journal.1 An article on how these engineering principles could be applied to therapeutic treatment was published in September 2014.2 For further information regarding this material and for clarity, the reader is referred to that article as well as the original engineering article.

The first important point is that compression applied to the external surface of the lower limb works and provides increased venous return. This is well exemplified in many articles, including that written by Partsch in which he demonstrates that using only 6 mmHg to apply pressure to the mid-thigh not only reduces the cross-sectional diameter of both the deep femoral vein and great saphenous veins, but also results in the cross-sectional area of the thigh changing its shape from an ellipse to a much more rounded and normal contour.3

There are two basic laws of physics that explain this phenomenon. The first, “Pascal’s Law,” states that external pressure applied to the limb, such as that through an elastic device (compressive hosiery or wraps), produces internal limb pressure that is transmitted equally in all directions. This internal pressure directly decreases girth of engorged veins, which directly results in an increase in proximal venous outflow.

The second is Laplace’s law (P = T x R). A full description of the physics behind this principle is described in the Journal of Wound Care article.2 For brevity, the essential point relative to this discussion is that once tension (T) is applied to a limb with a wrap, hosiery or similar compressive device, the only way interface pressure (P) can increase is if the radius (R) increases. This law applies to any compressive device that fits around the body part (i.e. the upper or lower extremity).

The dynamics of the physical properties of compression are described and best understood using engineering laws and properties. For example, the engendering term “creep” refers to the deformation of a material over period of time due to an applied stress. An example would be an elastic material that is stretched to a set force; this material would slowly lose some of the tension force. Medical literature describes this phenomenon as material “fatigue.” However, the term “fatigue” in engineering terms refers to failure of a material when the compressive force is no longer applied. The engendering terms “fatigue” and “creep” describe two different processes, resulting with confusion between bench science and that of medicine. This article will use the appropriate engineering terms in describing the dynamics of compression.

In addition, many past articles have used the term, “sub-bandage pressure” to describe the amount of pressure (mmhg) applied to the skin under compressive wraps. Interface pressure should not be described differently for wraps and hosiery. For purposes of this article, the term “interface pressure” will reference the pressure under any type of compressive device. The author is a firm believer that better communication and understanding will occur when medicine and science use the same language and the same terms.

With a better understanding of the engineering principals of compression, the medical community can make better decisions as to how compression works to improve patient care.

One of the issues NCSU covered in their research was that the pressure measuring probes used to describe compression for a large number of clinical compression articles (Picopress and Kikuhime) were not accurate. These findings correlate with an article published by Thomas 2014.4 Furthermore, he concludes that the measuring devices have an error that is neither constant nor linear (proportional to the degree of pressure applied).

These findings call into question the validity of a significant amount of research in the field of compression therapy. NCSU therefore developed a new pressure measuring device using engineering fundamentals. The device is called CRIM and stands for “Center for Robotics and Intelligent Medicine” (CRIM), the division in the NCSU School of Engineering through which the data reported herein was ascertained.

In Figure 1, the three lower curves represent the creep found in three multilayer wraps that are popular in the US marketplace. The curve on the top line represents a new product indicating consistent compression throughout the five-hour session. 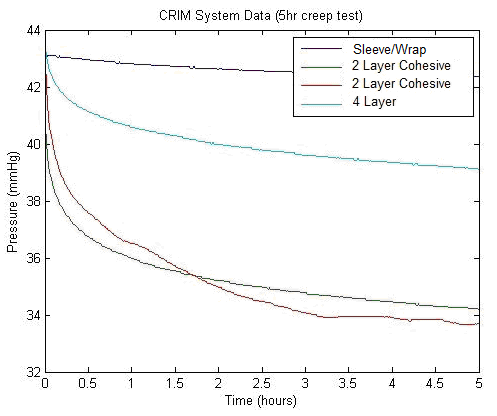 Figure 1: Creep curves. The three lower curves are 3 multilayer wraps popular in USA and indicate as much as a 25% loss of compression in only 5 hours. 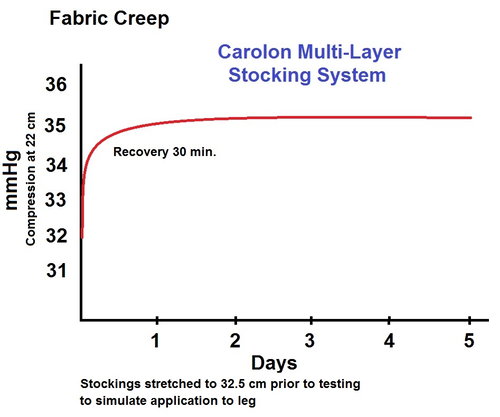 Figure 2: Creep curve of a multilayer hosiery system shows no loss of compression in 5 days

The findings demonstrated how creep impacts a large number of patients treated around the globe for venous ulcers and related edema. As an example, it is not uncommon for multilayer wraps after several days of wear to slide down the leg to the mid-calf. This can cause skin irritation and can lead to new ulcers developing along the tibial crest and other areas of the mid-calf. It has often been thought that this occurs due to loss of edema or possibly inappropriate application of the wrap. The information described in figure 1, however, describes a significant loss of compression due to creep. Combined with the loss of circumference and the variability of application of wrap systems, the resulting compressive device could lead to a significant loss of compression, allowing the compression device to more easily slide to the mid-calf and cause a reduction of the therapeutic value of the compression therapy.

What is causing a number of wraps to lose compression? Designing stable and effective fabrics for compression is a complex combination of yarns and knit structures. The applied compression and creep factor is related to these combinations, such as the size and type of spandex (primary stretch yarn) and the knit structure. Figure 1 illustrates this performance with three of the most popular multilayer wrap systems.

In researching these reporting findings, the authors point out the following: 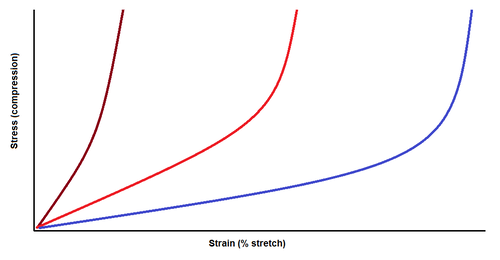 Figure 3 (above) is an example that demonstrates the stress-strain curve of a stiff, short stretch fabric such as an Unna Boot versus a long stretch fabric such as a long stretch or hosiery type of fabric. It also shows stress/strain curves that are between neither short nor long. Most of the multilayer wrap systems have a stress-strain curve the lies approximately midway between these two curves.

Because the interface compression is dependent not only on creep but highly dependent on the change in circumference, short stretch systems can increase compression quickly if the circumference increases and lose compression quickly if there is a loss of circumference. This may explain why short stretch systems such as Unna boots demonstrated very poor findings with improved wound healing, while hosiery consistently has a high correlation with increasing wound healing. The broad flattened stress/strain curve of hosiery demonstrates its ability to accommodate a range of limb circumference, correlating increasing and decreasing amounts of edema, while still maintaining therapeutic compression.

Development of a new product to address the above findings

Taking the above findings and clinical observations into account, Carolon put their research and development team to task by proposing a new treatment regimen and then, from that, working with engineering to provide a product that could be cost-competitive and address the items above. In essence, the task was to use this new data to develop a better treatment tool. The answer was to utilize the benefits of hosiery and limit the fabric limitations and the human element of variability in the application of current wrap system. This led to the development of something totally new, which is a “sleeve wrap” multilayer compression system that increases application consistency and addresses the above items one through eight. 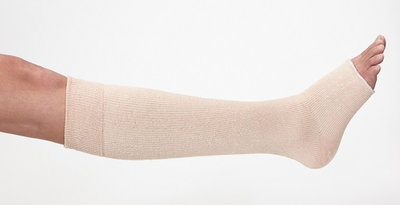 Figure 4 (sleeve wrap application from top to bottom): Application of the sleeve showing good contour without creases; applying the elastic wrap layer around the forefoot, heal and ankle, then spiral up the leg using 50% overlap technique; secure proximally just below the knee with two hook fasteners; three additional hook fasteners used at provider's discretion, most often if used applied around the ankle as well as posterior and planta heal. 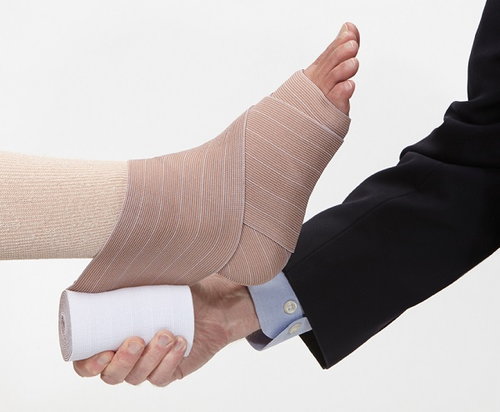 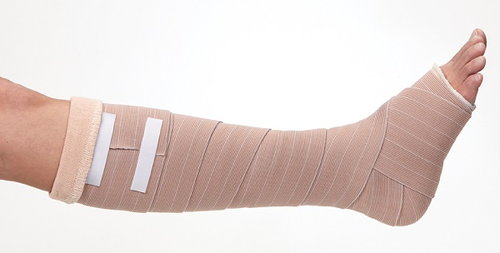 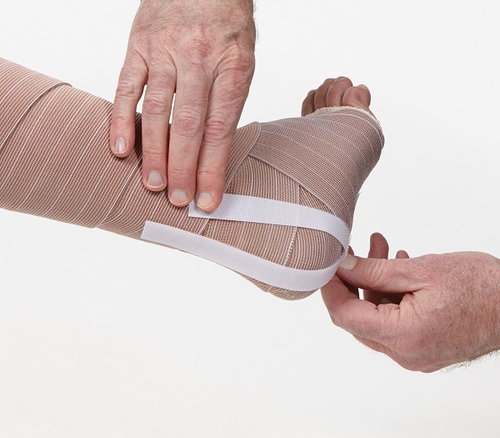 This article discusses how research—that was performed first independently—led to an analysis of methods to address and correct problems identified, as well as ultimate development of a new treatment regimen and a new product to improve patient care in a cost-competitive manner.

The research performed at North Carolina State University demonstrates conclusive data indicating that multilayer wraps used for compression therapy have significant “creep.” Other problems with currently utilized therapy for venous ulcers and related edema from other studies is also cited in this article. These inquiries were initiated by Carolon, a company historically involved in compression therapy. Members of the Carolon R&D team had questions about inconsistencies in past literature and scientific studies regarding compression therapy relative to patient care. The intent was to clarify these issues based on engineering principles and laws of physics. This then led to a new treatment regimen and new product development addressing each of the problems identified in current therapies. The “sleeve wrap” combines the benefits from hosiery with a totally newly designed sleeve and new elastic wrap material while removing many of the negative aspects of the current multilayer wraps available.