ABLATING LOWER extremity truncal veins to treat varicose veins is usually a straightforward procedure. However, recurrent disease can provide technical challenges in the approach to treatment.

Evaluation of the underlying problem begins with good sonography. A thorough lower extremity superficial venous ultrasound exam can identify refluxing truncal veins and problematic varices. These veins should be tracked proximally to their sources, although this can sometimes be difficult to identify.

Recurrent disease in the upper leg may present as painful, recurrent varices in the thigh. This may be from multiple sources, including anterior accessory or posterior accessory great saphenous vein (GSV) reflux, and connection with an incompetent thigh perforator or a pelvic source above the inguinal canal. There may also be neovascularization just distal to the confluence at the sapheno-femoral junction (SFJ) in a patient with history of prior ablation or ligation.

Recurrent disease in the lower leg may present as recurrent pain and swelling, progressive skin changes, bleeding varicose veins and new or recurrent venous leg ulcers. These are often due to tributary varicose veins connecting to incompetent perforators. These different types of recurrences can present challenges and require a variety of procedural approaches.

Clinical challenges for recurrent disease are often in these “gray areas,” where we lack technical and scientific guidance. In this opinion piece, we present our experience and approach regarding groin neovascularization and incompetent perforator veins for recurrent varicose vein disease.

Neovascularization at the SFJ

Neovascularization at the sapheno-femoral junction became recognized with the increased use of duplex ultrasound in the 1990s. Prior to that, recurrences at the junction were ascribed to surgical error and incomplete ligation. In fact, many patients recur because the refluxing trunk was ligated at the GSV/anterior accestory great saphenous vein (AAGSV) bifurcation, rather than at the SFJ. These are easily treated with ablation of the remaining trunk. With the development of ultrasound, it has been recognized that many recurrences following surgical ligation were due to tributaries arising from the SFJ stump. These were not normal native tributaries but thin-walled neovascularizations. The veins are tortuous, with almost malformation-like clusters of veins arising from the SFJ stump. They then connect to remaining tributary stumps distally. We now see this occasionally following GSV ablation.

What technology to use to ablate these recurrent reflux sources should vary with the specific anatomic situation. We’ll go through a few of these and discuss treatment options. The primary determining feature is whether there is direct connection to the SFJ. In that case, the vein can be accessed, a guide wire passed, a sheath introduced and the ablation catheter of preference passed, usually thermal or glue ablation. The tough cases present when access through the SFJ is blocked or tortuous. In this case, one must use the imagination, as there is no real data to support official guideline recommendations.

In the case of neovascularization following GSV ligation or ablation, the new veins often connect with the AAGSV (Figure 1-B). The AAGSV can be accessed, but a guide-wire will not pass through the SFJ. Even a sheath may not be easily introduced. If the AAGSV is long, a sheath can be passed, followed by use of a thermal or glue ablation. If the AAGSV is short, we have found a direct puncture and passage of a laser fiber to be a useful ablation tool. Foam sclerotherapy would be an alternative here as well.

However, if the tangle of neovascularized veins connects to surface varices or tortuous tributaries (Figure 1-C), a catheter ablation may not be possible. We have found direct puncture into one of the veins distal to the SFJ and passage of a laser fiber into that site to achieve a “spot- weld” to be successful. Ultrasound-guided injection with foam, commercial or homemade, can work, though with perhaps more concern for a thrombotic extension at the SFJ. If the SFJ is compressed during injection, the complication may be avoided. Direct injection of glue has been suggested, but there is no data or FDA approval to support this.

The SVS/AVF Clinical Practice Guideline recommends the treatment of incompetent perforating veins (IPVs) defined as outward flow of >500 ms, with a diameter of >3.5 mm, located beneath a healed or open venous ulcer (Clinical Etiologic Anatomic Pathologic [CEAP] class C5-C6). With increasing severity of venous disease, there is increase in IPV frequency, although there is a lack of data directly identifying if the treatment of IPVs will promote ulcer healing and prevent ulcer recurrence. There is limited data contradicting this treatment, but higher level data has not yet been obtained. Available options for treatment of IPVs include open ligation, subfascial endoscopic perforating vein surgery (SEPS) (now essentially abandoned), ultrasound guided sclerotherapy (UGS), or percutaneous ablation (radiofrequency or laser) of perforators (PAPS).

Of the available IPV treatment options, percutaneous techniques such as UGS or PAPS is usually preferred over open surgery as this eliminates the need for incisions in areas of compromised skin. In IPVs in the upper calf and thigh, this is still an option. The approach to choosing the method and timing of treatment of IPVs have not been discussed in detail in the current guidelines, but in general, less invasive procedures are preferred if they are available and equally effective.

PAPS has been successfully performed using laser and radiofrequency, with and without concomitant UGS, with reports of high initial closure rates.

The details of the procedure is beyond the scope of this article, but it is minimally invasive with rare complications. Treatment can be repeated if IPVs recur. Although PAPS can be an effective way to close IPVs, these perforator veins can often be torturous, making access difficult. It has also been shown that there is no significant difference in closure rates based on different treatment modalities. If this is the case, many of the cases may respond well to a UGS-only treatment if performed carefully. The approach to UGS for IPVs can begin by recognizing that there are two targets for therapy. The first target is the IPV itself, and the second target is the periulcer venous network (PUVN), which is often connected to an incompetent tributary vein (Figure 2-A) or the IPV itself (Figure 2-B). One advantage of UGS over PAPS alone is that it can be effective in obliterating the PUVN, which is often the reservoir for the venous hypertension leading to a non-healing wound. 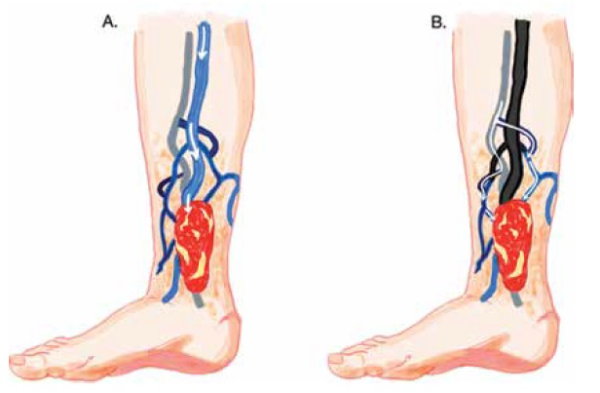 Figure 2.
A: Distal GSV and an incompetent tributary vein connecting to the PUVN;
B: Incompetent perforator vein draining into the PUVN

The specific technique for performing UGS is variable among practitioners, but the approach can be broken down to (1) access and direction of injection, (2) patient positioning, (3) medication injection and ultrasound check, and (4) compression and after care.

Preference for what to use for access is variable. The authors use a combination of a 27G needle, a 21 or 23G butterfly or occasionally a 21G micropuncture kit if requiring deeper access. Antegrade versus retrograde access depends on location of IPV in relation to PUVN. Patient positioning is also by preference, but for larger veins, putting the patient in a Trendelenburg position or elevating the legs about 15–30° by tilting the exam bed can help to collapse the veins.

The venous blood in the accessed vessels can be flushed out with saline. Following this, the sclerosant can be carefully injected under close ultrasound observation. A foamed sclerosant is echogenic and can be monitored traveling through the vein. Once this nears the location of the IPVs, one can apply digital pressure to prevent flow into the deep veins. The injected amount of foamed sclerosant is variable between five to ten milliliters, depending on the size, diameter, and distribution of the veins. Direct pressure to the injected area is applied for two to three minutes to minimize blood trapping that can lead to thrombophlebitis or other discomfort. Following this, frozen cotton balls can be applied and taped down over the injected areas to maximize post-surgical compression therapy.

It is always concerning when doing UGS that there may be sclerosant that continues antegrade into the deep vein, causing DVT. However, if this is a true IPV, the reflux will likely produce enough pressure and make it difficult for the sclerosant to migrate to the deep vein.

Despite this, direct injection of the sclerosant into the deep vein should be avoided. By treating the PUVN, this reduces the venous reservoir to which the refluxing IPV was connected and that was causing venous hypertension.

These are just a few of the gray areas in superficial vein treatment. These cases can be a big challenge, especially for less experienced practitioners. We now have communication with peers available through both the American Venous Forum (AVF) and the American Vein & Lymphatic Society (AVLS) websites. If one is new to the field and encounters one of these situations, we recommend consulting with more experienced peers for advice. Our community is large and willing to assist each other.