To paraphrase a famous rock anthem by Saxon1 (and to change the year slightly): “Where were you in ’99 when the dam began to burst?”2 Several allusions to popular music are embedded in this text (in bold). If you fancy finding their origin, the solutions are at the end of the article.

By the end of the nineties, the dogmas of superficial venous disease treatment were shaking all over.4 The sacred, written-in-rock5 gold standard of the “enlarged crossectomy” and the virtues of stripping tools (rigid, flexible, with olive or other vegetables etc.) were not only patient unfriendly and ruinous for the payers but (from a more personal perspective) were rendering many venous meetings boring and challenging attendees to stay awake in the dimness of the congress halls.

The arrival of endovenous catheter-based thermal methods—LASER and Radiofrequency (RF)—took this “fin de siècle” community by storm. LASER, and the multitude of companies producing it, fiercely competed to find the right wavelength and the right tip. VNUS Medical Technologies RF was going from incompetent valve restoration (known as “Restore”) to vein obliteration with Closure Plus and then to the breakthrough6 evolution of Closure Fast, which has remained basically unchanged since 2005. Patients preferred the mini-invasive approach and played a significant role in changing the doctor’s orders.7 The predictable objections from the dogma bastion holders—lack of high ligation, price, procedure duration, the durability of the effect, specific side effects— were, one by one, swiped away.

Around the same time, an Atlantic crossing8 took place: an embryonic French start-up based in Paris9 was doing ex vivo and pre-clinical research using a technology called HIFU. Ultrasound waves were used for the first time, not for diagnostic/visualization purposes but for performing a genuine treatment. In a nutshell, the electromagnetic waves intersect in a focal point at the tip of a cone, enhancing the temperature and affecting a very precise amount of tissue. The moving targets10 of veins to be treated are covered gradually by a robotic system. A special liquid is constantly circulated below a membrane covering the treatment head (one of Theraclion’s exclusive IP elements) for coupling and cooling purposes. For Theraclion SA, the first indications were thyroid nodules and benign breast lumps. Needless to say, skepticism and surgical dogmas were, as in the case of early days for endovenous catheter-based products, a hard habit to break.11 Further, HIFU indications were tackled with more or less success by other companies, from China to Israel and the US. Globally, there was something in the air.12

Through the years,13 LASER and RF became more and more accepted by the medical community, and soon they were the leaders of the pack14. Instead of strippers and olives (which finally went back during the meetings from abstracts to their logical place, in a Martini glass at the welcome reception) physicians were now speaking “J/cm,” “vein wall collagen coagulation,” “tumescent anesthesia,” and “ambulatory” was the magic word.15 The jewel in the crown16 was the inclusion as first intention recommendation in various international guidelines and reimbursement was accepted, even in countries where shaking the tree17 seemed to be just an illusion,18 like France. In parallel, more endovenous catheter-based methods were developed, this time using mechanical methods: temporary or definitive chemical foreign body products like foam or glue, from Turkey or the US.

Theraclion SA gained tremendous experience during this same period in treating thousands of non-venous cases all over the world,19 from Germany to Hong Kong and the USA (in clinical studies on breast fibroadenoma, breast cancer and melanoma). The ability of the system to exclusively treat thyroid tissue and avoid all the dangerous places20 became, little by little,21 not only more sophisticated but also extremely safe. Regulatory approvals and reimbursement in certain countries like Germany accompanied these achievements. However, at a certain point, it looked like a missing piece22 was still to be found.

In 2020, endovenous catheter-based reign is an unquestionable truth.23 Consolidation is at work, and newcomers are trying to improve the existing products marginally, but they are still walking in the footsteps of the giants.24 Certain gentrification is palpable, and this always predicts the glass ceiling25 is dangerously approaching. Insidiously, a new thought process is raising the question: Are more innovative and different methods still necessary, given the performances of the existing products?

Perhaps these persons should have a quick chat with Elon Musk to upgrade their mental software. A fantastic cycle of more than two decades is leading to a relative stagnation. However, increased chunks of the old world’s stripping market conversion and higher demand for mini-invasive procedures driven by patients and ambulatory setting migration are enlarging the global market.

Around the end of 2017, Theraclion SA found the missing piece from its portfolio. After intensive ex vivo and in vivo work, countless pre-clinical cases, and the first clinical study with HIFU in superficial lower limb veins, SONOVEIN® was approved in Austria. Fifty cases were performed, leading to the European CE mark approval in April 2019 (CE 704941), quickly followed by approvals in Asia. The first commercial center opened in London in May 2019. Early adopter KOLs to Germany, France, Czech Republic, Spain, and other territories currently use the methods.

The vein is obliterated completely extracorporeally—great saphenous veins, small saphenous veins, saphenous stumps, neovascularization, perforators, and recurrences. This is done without pre- or post-operative anticoagulation, in non-sterile settings. Tortuosity of the vein and aneurysmal dilatation are no longer issues. In addition, the distance to the saphenofemoral junction, induration, allergic effects to foreign bodies, and pigmentation are obviated. 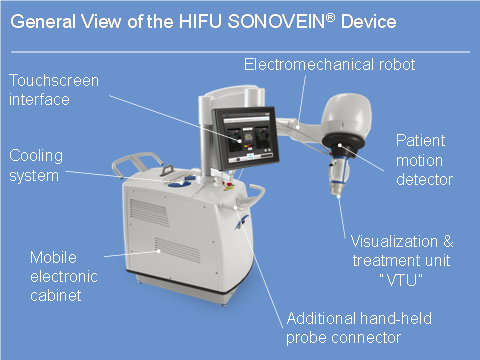 SONOVEIN® is now at the same point where VNUS Medical Technologies was just before the transition from Closure Plus to Closure Fast in terms of the maturity of the product. It is on a smaller scale, in terms of market penetration, but also completely alone and competition-free regarding this disruptive vein treatment approach.

What tomorrow will be, with the second generation of SONOVEIN®, we will know very soon. So far, so close.27 SONOVEIN® second generation was cleared for market access in the CE Mark covered territories beginning August 2020. Further studies on a larger scale in the US with selected KOL sites are in the pipeline.28

But let’s try to dream on,29 take one step into the future30 to think about the following scenario:31 SONOVEIN® is using a robotic arm, and each shot to the targeted tissue is automatically recoded as an ultrasound image in the system’s hard drive immediately before and after. It allows one to know exactly where it was targeted, which quantity of energy was delivered and how deep under the skin, due to the fact that the skin level is automatically identified. In addition, SONOVEIN® automatically adjusts the power to protect the skin, taking into consideration the internal cooling system values at the treatment head level.

An invaluable amount of information can be collected and used for the system’s algorithm improvement. And then, one day, the machine could reasonably do the job by itself, once the starting point of the treatment is established, the robot driven by the algorithms. The operator could control the treatment ultrasound screen of the system remotely when necessary. Digitalization, AI, and remote control were boosted by the COVID-19 imperatives, not even speaking about the absence of incisions which eliminates possible contamination.

Looking into the great wide open,32 no one can contemplate the glass ceiling for further developments. Another cycle begins for venous insufficiency treatment, nobody knows at which speed or for how long, but what is sure is there is no turning back.33

Dr. Nuta is Chief Medical Officer & Vice President of Veins for Theraclion SA, a French company specializing in high-tech therapeutic ultrasound equipment including SONOVEIN® for the treatment of varicose veins of the lower limbs and the Echopulse® for non-invasive and ambulatory treatment of breast fibroadenomas and benign thyroid nodules.