Men & Vein Disease: The Numbers are Higher Than You Might Think 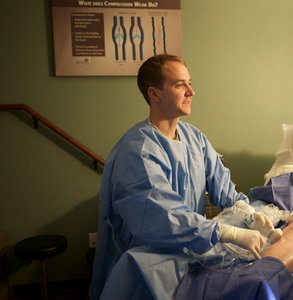 I am frequently asked to speak to the differences in prevalence of vein disease between men and women. For a very long time, my answer was always the same: females are affected at about four times the rate of men. This was the answer I was taught in my training, and a widely accepted fact that I repeated for several years.

However, over the last year, I noticed more males in my practice than I would have predicted. An audit of new patients at my clinic who were referred or self-referred for vein disease revealed that I saw twice as many females as males. The female-to-male ratio was then apparently 2:1, not 4:1 as I had previously thought. While this chart audit was not scientific by any means, it did bring into question many of my previous assumptions about gender and vein disease. I had also thought that men showed fewer clinical signs of vein disease, that they were less compliant when it came to wearing compression stockings, and that they were more likely to develop venous ulcerations. Were these assumptions also wrong?

It was precisely this line of thinking that led me to review several population-based studies in an attempt to debunk or confirm my questions. What follows are some of my findings.

The San Diego Population Study is a particularly well-designed study that is both recent and applicable to patients I see in my practice. That particular study reports a prevalence of functional disease (identified using duplex ultrasound) of 13.1 percent in men, and of 22.2 percent in women. Moreover, varicose veins were identified in this study using clinical exam in 15 percent of men and 27.7 percent of women. The prevalence of varicose veins and chronic venous insufficiency as identified in the San Diego study are much closer to the 2:1 ratio that I have observed in my practice.

The Edinburgh study, meanwhile, underscores the wide variability of prevalence between differing peoples. Researchers behind that study found higher rates of venous insufficiency in men (9.4 percent versus 6.6 percent) and higher rates of mild varicose veins in men (33.3 percent versus 26.2 percent). This was a study of predominantly Caucasians in an industrialized country. Interestingly, the variability of results was even more significant when the studies involved non-Caucasians in developing countries.

For example, men are more likely to present symptoms indicating deep functional disease (11.3 percent versus 7.8 percent). Men are also more likely to develop deep thrombotic events, with a prevalence of 4 percent compared to 2.7 percent in women. The higher rate of deep thrombotic events would likely account for the increase in deep functional disease that is observed. A significant portion of this deep vein thrombosis is asymptomatic, but can lead to valve damage and deep venous reflux.

The differing clinical signs between men and women are likely a result of the varying prevalence of deep and superficial disease between the sexes. The increased likelihood of trophic skin changes (7.8 percent versus 5.3 percent)2 in men is likely due to the increased prevalence of deep venous insufficiency and deep thrombotic events. There is generally increased venous hypertension with deep versus superficial vein disease. In the San Diego study, men were also more likely to develop edema, and there was a strong correlation noted between edema and trophic skin changes. Despite the increased likelihood of trophic skin changes and edema, men’s legs were more than three times as likely as women’s legs to be visibly normal (33.6 percent versus 11.0 percent).

Surprisingly, men are not so different from women when it comes to graduated compression stocking compliance. An eight-year observational study reports the rate of overall compression stocking compliance to be similar (albeit poor) between the sexes, at 39 percent versus 38 percent. It appears that both genders are equally reluctant to wear compression gear as part of their recovery or prevention. Subgroup analysis demonstrated that there was a trend for increased compliance among those with post-phlebitic syndrome and deep vein thrombosis (50 percent versus 35 percent) but this finding was not analyzed further so as to be broken down by gender. However, if there is increased prevalence of deep vein thrombosis and post-phlebitic syndrome among men, then I would like to think that the men are pulling slightly ahead in this area.

In conclusion, it appears that, overall, the gender prevalence is closer to 2:1 than the 4:1 that I initially thought. Key takeaways:

In the end, it seems that a few of my assumptions about men were correct, but many were wrong. I hope this helps to clear up any of your own questions about gender differences, and maybe even prompt you to look into some of your assumptions about vein disease among men or in general. As health care providers, we rely on scientific facts for guidance – but we must also remember that these facts can become stagnant and even outdated as methodology and technology evolve. It is important to always be seeking out new studies and sources of information and to update our theories and practices accordingly.

Timothy Cawlfield, M.D. is Board Certified in Family Medicine and a Phlebologist specializing in the treatment of vein disease at American Vein and Vascular Institute.