Leader of the Band: An Interview with the American College of Phlebology's New Executive Director Dean Bender 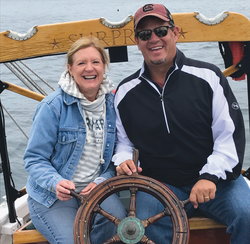 There are plenty of examples of people who have been involved in an organization for years and, after searching and searching for a new leader, end up being promoted from within. Phil Collins of the band Genesis comes to mind. He was already established as the band’s drummer for years before lead singer Peter Gabriel went solo.

They began an exhaustive, time-intensive search for his replacement, only to find that they had the perfect candidate right there under their noses. Genesis and Collins both benefitted from that promotion, together going on to become further legends in the music industry and opening up Collins to a future of celebrated hits with and apart from the band.

Dean Bender’s story of moving up to become the new Executive Director of the American College of Phlebology is sort of like that.

Dean has already been serving the organization as a pacesetter–keeping the beat of growth and promise as the ACP continues to work towards their mission of educating, recruiting and advancing the standards of venous and lymphatic care.

His 13+ years’ experience within the industry, and knowledge of the issues and players in the field of venous and lymphatic care make for a better-educated leader for the future. His passion for this segment of medicine makes him perfect to step up to the mic for the job. We’ve all seen Dean working the conferences, walking the halls of education and consulting on any number of issues.

But what are the origins of his work within this field of veins?

Dean's early beginnings, and his path to ACP

As a kid, Dean wanted to be the usual garbage man/fireman/astronaut–you know, the heroes most little boys proclaim they wish to be. But as he grew up he realized that his sights might have been set a bit too high. During his college years at the University of South Carolina, and after realizing that a career in drama would not be fruitful, Dean decided to follow the footsteps of his father, an electrical engineer, and pursued a career in chemical engineering.

Thus began a unique career path that eventually led to the medical device industry and compression therapy. After 18 years in the textile chemical industry, Dean joined BSN medical as Global Head of Research and Development in 2004.

In this role, he had the opportunity to develop close and personal relationships with those doctors he calls his mentors and friends–Drs. Steve Zimmet, Nick Morrison, Peter Pappas, Bob Kistner, Marlin Schul, Trip Todd and too many others to mention here–which led to his active participation and commitment to the ACP and the ACP Foundation. Dean was there at the formation of the Foundation, serving as the first Treasurer and as a board member for nine of the past 12 years.

Last year, as Bruce Sanders began preparing to say his goodbyes, the process to fill the void went underway. As a part of the search committee, Dean became involved in an exhausting, months-long search in pursuit of the ideal candidate to lead the College into the future.

By February, Dean had finally arrived at the point where he was pondering if perhaps he, himself, might be better at assuming the role. He certainly knew the segment, and he could hit the ground running, losing little startup time while keeping the pace for the next set of leaders and list of actions the ACP wished to accomplish. He ran it past his wife who wholeheartedly agreed. The rest, as they say, is history.

Who is Dean Bender?

Born in Hammond, Indiana, in December of 1964, Dean is one of the last of the Baby Boomers. “I have lived in Pennsylvania, New York and now in the Carolinas for the past 42 years. We have recently added Florida to our list of residences. As empty nesters, we are now splitting our time between Hutchinson Island, FL, where we winter on the beach, and the foothills of North Carolina near Hickory, where we enjoy the summer and fall.”

Dean and his wife, Debbie, have been married for more than 29 years. “We met in Charlotte through mutual friends. Our first date was January 15, 1988 and we were married August 27, 1988. We don’t like to waste time when we know what we want! She currently is semi-retired and runs a small vacation rental business at Ocean Village on Hutchinson Island with her father, where they have several beach condos for rent. Look for an opportunity to bid on one of the units at the Silent Auction in Austin where she has donated a unit for the past few years.”

Dean and Debbie have one daughter, Amanda Godwin, who is 27 years old. “She is proof that 1+1 does equal 3! Debbie and I couldn’t be prouder as she has turned out to be such a brilliant and beautiful person! With a degree in Strategic Communications from Elon University, she has worked the past several years for Joe Gibbs Racing, NASCAR, where she had the opportunity to work for one of my childhood heroes, Coach Gibbs.

I grew up a Redskins fan–I had the pajamas, bean bag chair, the whole shebang! Aside from getting to meet so many of the football players I followed growing up, she also has had the privilege of being part of a National Championship in NASCAR when Kyle Busch won the title two years ago. You need to ask her to show you her National Championship ring someday!

Most exciting for me and for the College is that Amanda just recently joined my team in San Leandro, CA as our Marketing Manager. Now I am able to get a direct return on the investment I made in her education!”

What do they like to do with their spare time? “We love to travel and vacation with our friends. In fact, next summer, we are all headed to France for a river cruise through wine country. In addition, golf has been a passion of mine since I learned to play in college (I skipped a few classes my senior year to hit the links), and now that Debbie is also an avid player, we look for opportunities every week and when we travel to play together. Look for us in this year’s Golf Outing of the Foundation in Austin! We also have begun playing tennis where we play with friends most Sunday evenings (weather permitting) followed by pizza and beer. What a great end to the day!”

Dean and Debbie are active within their church community, as well. “Our faith is central in our lives. I teach an adult bible fellowship class at Denver Baptist Church in Denver, NC, where we have been members for more than 14 years.”

And finally, having considered a career in drama, Dean proclaims, “I love the theatre and look for every chance to go to New York City and catch a Broadway show. If and when I finally find myself in a place where I am not spending every week on an airplane, I hope to get back involved in our local community theatre.”

Moving from corporate to non-profit with a new vision

Now, after officially beginning as ED on July 1, we asked Dean how things were going and if moving from corporate/industry to a nonprofit is much different. “Not at all,” said Dean. “The only difference in a for-profit and a nonprofit organization is that the nonprofit simply reinvests all the proceeds into achieving the strategic mission and goals of the society, not investors or board members.”

With more than 30 years of leadership under his belt, Dean feels his leadership style matches that of the position well. “My success over the years has come from surrounding myself with excellent dedicated people, providing them with direction and support and then empowering them to accomplish their goals and objectives. Everyone has their role to play and as long as we all do, we all win.”

Dean, alongside 50 other dedicated leaders of the society and corporate partners, gathered two years ago to craft a new vision for the future, a new horizon for the College to benefit the members, the field and, most importantly, the patients.

This new horizon expands the investment of the community in venous and lymphatic medicine beyond providing the highest quality education to include leading research through the registry and other initiatives, and to actively advocate with policy makers and payers on behalf of patients and members. Now Dean is excited to be in a position to work with the leadership of the College to see those goals come to fruition (See Dean’s update on ACP's new path, "For Such a Time as This”).

When asked about his personal goals in this new position, he replied, “First and foremost will be to clearly communicate the strategic plan for the College and begin to rally the leadership, membership and corporate partners in such a way so that we are all headed in the same direction, towards the same horizon. We have a lot to accomplish that will require all our stakeholders (membership, corporate and staff) to step up and become active if we are to be successful.”

When asked what the biggest challenges have been for the vein space in the past several years and what needs to happen to move forward, he said, “Without a doubt, the rapidly changing and unstable ground of health care policy, which has created mass confusion among patients and providers as to how we can effectively care for our patients while controlling the cost of care. Who knows what this will look like tomorrow, much less next year or the year after? But having the College commit to investing our resources into advocacy for our patients and members is an opportunity to try and stay on the edge of the wave of this change.”

We offer up our sincerest congratulations and look forward to seeing his continued impact on this ever-developing segment of medicine. It’s time to take the mic, Dean–Turn it On (Again!).

I agree to receive emails from Vein Directory. I can withdraw my consent at any time by unsubscribing.
I agree to the Vein Directory Terms of Use and Privacy Policy, and to the use of cookies described therein, and I also consent to the collection. storage, and processing of my data in the United States, where data protection laws may differ from those in my country.