The Bashir™ Endovascular Catheter (Thrombolex, Inc., New Britain, PA) was invented by Riyaz Bashir MD, from Temple University, Philadelphia, in order to (1) create a channel for immediate blood flow through the culprit clot and (2) allow for precise and targeted delivery of thrombolytics and other agents directly into multiple cross-sectional areas of large thromboses.

This innovative platform technology has been found to be safe, effective, and remarkably easy to use in early human studies.

The main characteristics of the technology are shown in figure 1A-C. Presented herein, are 2 illustrative cases of the use of the Bashir Endovascular Catheter platform for the treatment of (a) a large deep vein thrombosis (DVT) of a lower extremity with May-Thurner syndrome, and b) a massive saddle pulmonary embolism with bilateral pulmonary emboli.

A. Actuator (slider) located on the handle at the proximal end of the device. 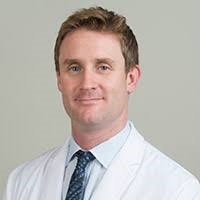 A 65-year-old man with a history of hypersensitivity lung disease and gastroesophageal reflux presented to the emergency department after experiencing a first, 12-hour episode of swelling of the left lower extremity and moderate, dull pain aggravated by weight-bearing. He reported no fever, shortness of breath, chest pain, recent trauma, change in activities, or relevant family history.

The admission laboratory tests revealed a peripheral blood white cell count of 16.2 x 106/µl and a D-dimer plasma concentration >10,000 ng/ml. He had a negative COVID-19 test 3 days before admission.

A venous duplex of the left lower extremity revealed the presence of a thrombosis involving the left common, femoral, and deep femoral veins, as well as the popliteal, posterior tibial, peroneal, gastrocnemius, and greater saphenous veins. As per protocol for an acute femoropopliteal deep vein thrombosis (DVT), an intravenous heparin infusion was started. On computed tomographic venography, the thrombosis was seen to extend into the common and external iliac veins, with fat reticulation surrounding the left femoral and iliac veins consistent with thrombophlebitis. A focal narrowing of the left common iliac vein as it passes behind the right common iliac artery, was indicative of underlying May-Thurner syndrome.

The patient was taken to the cardiac catheterization laboratory where he underwent diagnostic venography, which confirmed the presence of a) an extensive, acute thrombosis involving the left common, internal and external iliac veins and the common femoral vein, b) a focal narrowing of the left common iliac vein as it travels behind the right common iliac artery, and c) multiple pelvic, collateral veins. The inferior vena cava and renal veins were patent. No evidence of pulmonary embolism was found on thoracic computed tomographic angiogram.

A decision was reached to perform thrombectomy and thrombolysis of the very symptomatic, extensive deep vein thrombosis of the left leg. Venous access was obtained from the left popliteal vein. Venography confirmed the presence of a large thrombus burden, extending from the common iliac vein, which was occluded at the site of May-Thurner vascular compression, down to the common femoral vein. The image also revealed abundant collateral vessels around the region, and several other characteristics of acute, as well as chronic thrombotic obstruction (figure 2A). A Bashir +40 Endovascular Catheter was introduced and advanced through the thrombus. The infusion basket was expanded at the site of common iliac vein occlusion (figure 2B - arrow). 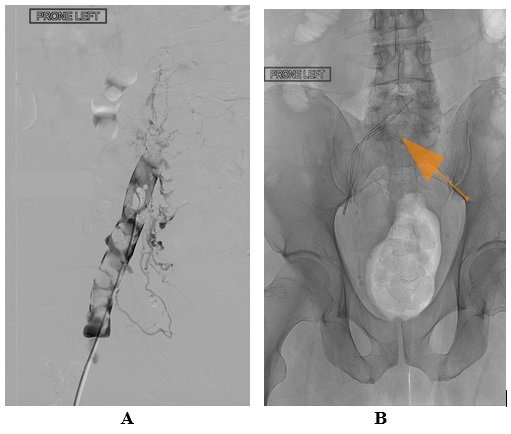 Recombinant tissue plasminogen activator (r-tPA), 0.25 mg/h, was then administered for 24 hours through the ports of the expanded infusion basket, and an additional 0.25 mg/h was administered for 24 hours through the infusion ports along the distal length of the catheter shaft, for a total dose of 12.0 mg over 24 hours. Venography performed the next day revealed the complete resolution of the acute and the chronic thrombotic occlusions. Furthermore, brisk blood flow was observed through the site of the previously obstructed left common iliac vein, with distinct visualization of mild residual stenosis (figure 3A&B). 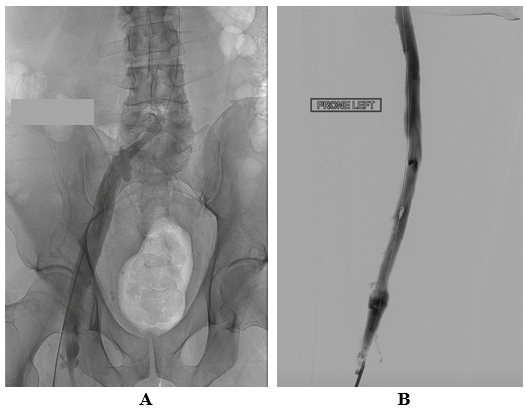 Post lysis, using BEC+40 and a total of 12.0 mg of r-tPA was infused via the basket and shaft

A Venovo® (BD Bard, Tucson, AZ) venous stent system was placed at the site of previous iliac vein occlusion (figure 4A), with brisk flow observed through the stent (figure 4B). The procedure was uncomplicated and associated with minimal blood loss. The patient was discharged from the hospital 23 hours after completion of the infusion on a regimen of enoxaparin, 1.0 mg/kg twice daily for 10 days, before the transition to apixaban 5 mg twice daily, and aspirin, 81 mg daily. 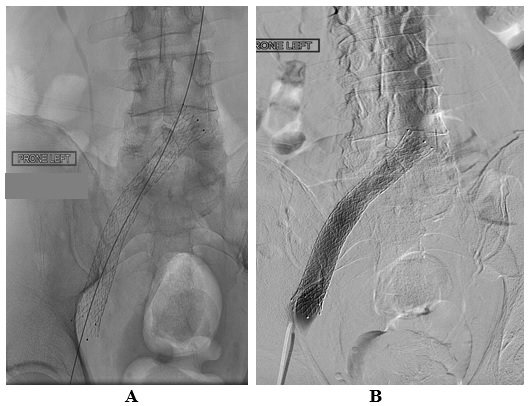 Post lysis, using BEC+40 and a total of 12.0 mg of r-tPAwas infused via the basket and shaft

The key takeaway from this case is that the Bashir +40 Endovascular Catheters, which allowed (a) the immediate restoration of blood flow by opening the basket in the thrombus, and (b) the simultaneous infusion of low doses of thrombolytics through the infusion basket and the shaft infusion segment, for up to an additional 40 cm, provide a valuable, effective treatment of large and long DVT. This case illustrates a very impressive, complete clot resolution and flow restoration, achieved using a total of only 12.0 mg of r-tPA overnight, in a patient with an extensive acute-on-chronic iliofemoral DVT. This patient experienced no bleeding or other adverse complications relating to the procedure.

In our experience, patients presenting with such cases are often treated with other CDT technology, requiring much larger doses of r-tPA, for much longer infusion periods, with variable success and increased risk of bleeding complications. Furthermore, no adjunctive mechanical thrombectomy, using expensive aspiration devices was needed. As is often the case in patients with the May-Thurner syndrome, complete treatment required the insertion of a stent in the left common iliac vein. The Bashir +40 Endovascular Catheter removed the large volume of thrombus in a short time period without complications. We view it as a valuable new option to remove extensive clot burden found in large vessels. 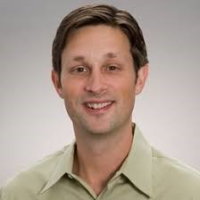 A 79-year-old, previously healthy, non-smoker man presented with a 4-day history of dyspnea, which began during moderate exercise and worsened on the day of presentation, associated with new onset of mild chest pain. He had observed swelling of his right lower extremity for several months but had not sought medical attention. He presented to the emergency department in acute respiratory distress; his heart rate was 123 bpm, systemic blood pressure 90/47 mmHg, respiratory rate 40 breaths per min, and oxygen saturation 90% on room air. The laboratory tests revealed a brain natriuretic peptide blood concentration of 3,200 pg/ml, (normal <450), and blood troponin concentration of 0.079 ng/ml (normal <0.034). Emergency thoracic computed tomographic venography showed a massive saddle embolism and large bilateral pulmonary emboli. His right ventricle (RV) was abnormally large, with an RV/left ventricular (LV) ratio of 5.3:1, and marked hypoperfusion of both lungs (figure 5A&6). The normal RV/LV ratio is under 1.0 and the death rate increases progressively as the ratio increases. He received an intravenous bolus of heparin and the pulmonary embolism response team was activated. Pulmonary angiography showed a massive saddle embolus and large bilateral pulmonary emboli. The initial pulmonary artery pressure was 50/23 mmHg and a mean of 33 mmHg. Intravenous fluids were administered liberally to maintain his blood pressure. 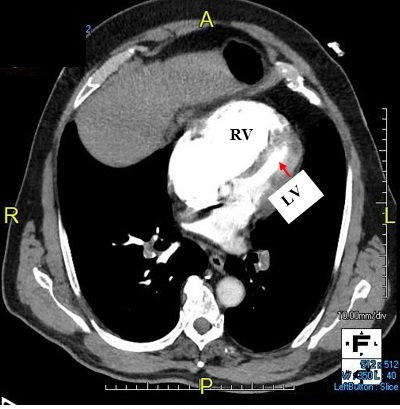 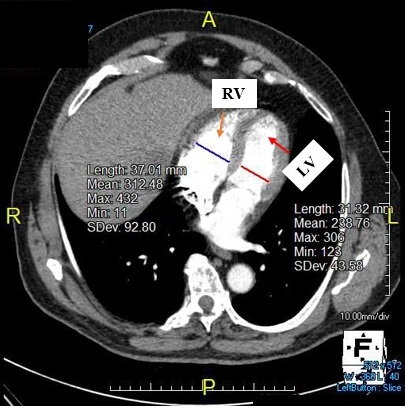 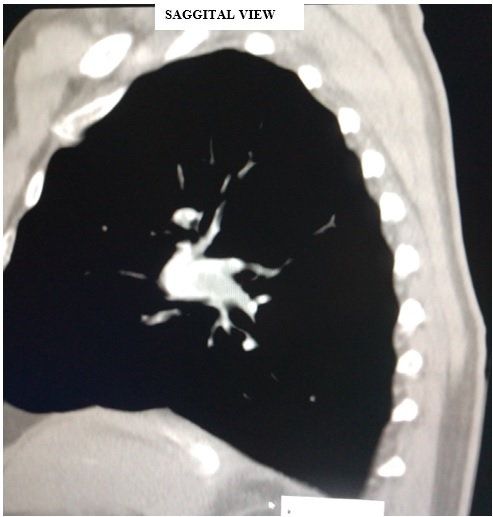 The patient was transferred directly to our cardiac catheterization laboratory, where heparin infusion and intravenous fluids were continued. The patient underwent pharmaco-mechanical thrombolysis using the Bashir Endovascular Catheter. Boluses of 2.0 mg of recombinant tissue plasminogen activator (r-tPA) were injected into each pulmonary artery, followed by bilateral infusions at a rate of 0.65 mg/h, to a total dose of 14.0 mg, including the initial 2.0-mg bolus. It is worth noting that the FDA has approved the use of intravenous r-tPA, in a dose of 100 mg over 2 hours, for the treatment of massive pulmonary emboli. However, there is up to a 30% risk of systemic bleeding and 3% risk of intracranial hemorrhage with the systemic administration of such a high dose of r-tPA.

Within 1 hour of the first pulmonary arteriogram, the patient's heart rate had decreased to 86 bpm and his systemic blood pressure had increased to 110/74 mmHg. Procedure duration in the cardiac catheterization laboratory was about 55 minutes. The patient was transferred to the medical intensive care unit and within 2 hours of the start of the procedure, the patient was recovering comfortably. The patient received bilateral infusions of r-tPA at a rate of 0.65 mg/h, to a total dose of 14.0 mg, including the initial 2.0-mg bolus in each pulmonary artery. Follow-up pulmonary arteriography, performed 16 hours after admission, revealed a decrease in pulmonary artery pressures to 43/12 mmHg (mean = 23), and a marked increase in the pulmonary arterial perfusion bilaterally compared to pre-procedure (figures 7 and 8A&B). His heart rate at that time was 57 bpm, respiratory rate 17 breaths per min, and oxygen saturation 99% on 3-L of nasal cannula. One hour after discontinuation of the r-tPA infusion, the patient was transitioned to an 80-mg subcutaneous dose of enoxaparin therapy.

The patient was discharged from the hospital 48 hours after the thrombolytic procedure, on a regimen of apixaban, 5 mg twice daily. A 2-month follow-up, thoracic computed tomographic angiography showed resolution of all emboli, and a RV/LV ratio of 1.3:1 (figure 5B).

This case illustrates the very impressive outcome of a patient presenting with a massive pulmonary embolism and RV/LV ratio of 5.3:1, treated with Bashir Endovascular Catheters in both pulmonary arteries. An RV/LV ratio of this magnitude is very rarely documented, and usually fatal if untreated. Pulmonary embolism is the third leading cause of cardiovascular death behind myocardial infarction and stroke. It is also the number one cause of in-hospital mortality.

The patient’s clinical and hemodynamic status improved markedly during the procedure, following a total of only 2.0 mg of r-tPA pulse sprays in each pulmonary artery, after repeatedly expanding and collapsing the infusion basket of the Basher Endovascular Catheters in each pulmonary artery. I like the ability to expand and contract the infusion basket as it helps to restore blood flow immediately and allows the device to conform to the size of large vessels up to 45 mm in diameter. The low profile design of only 7 French makes it easy to steer and very compliant in tortuous parts of the anatomy. In addition, this unique device provides us with rapid results that we have not found with any other device. As an example, in only 16 hours following the procedure in this case the pulmonary angiograms revealed a marked increase in pulmonary blood flow.

There were no bleeding complications or adverse events of any kind related to this critically ill patient. The fact that the patient was well enough to leave the hospital 2 days later is a testament to the effectiveness and safety of the Bashir Endovascular Catheter in combination with a low-dose r-tPA regimen. The marked reduction in the RV/LV ratio to near normal at two months is another noteworthy finding that augurs well for the future of this patient. Alternative devices I have used in the past have not been adequate for the quick resolution of the clot. Using the Bashir Endovascular Catheter, we have been able to get results that we have been unable to achieve with any other device.