How Advanced Catheter-Directed Therapies May Help Improve Outcomes While Reducing the Incidence of Post-PE Syndrome (CTED/CTEPH) and Post-Thrombotic Syndrome (PTS) in the Treatment of VTE Patients. 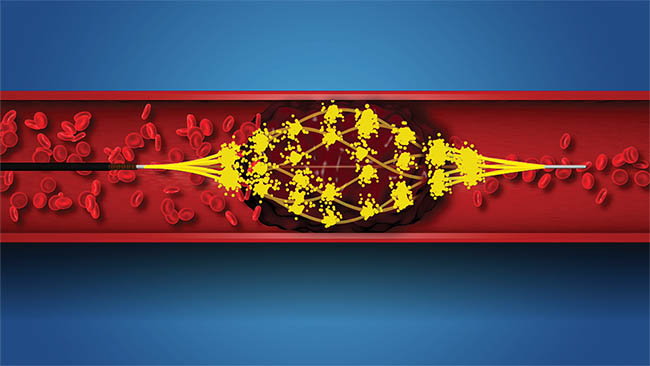 VENOUS THROMBOEMBOLISM (VTE) is a vascular condition that affects about 10 million patients worldwide each year. Deep vein thrombosis (DVT) most often forms in the deep veins of the legs, groin, or arms. If they break loose, they can travel to the pulmonary arteries in the lungs and result in a pulmonary embolism (PE), with potentially fatal outcomes. Together, DVT and PE are known as VTE.

The Role of Catheter-Directed Interventions

Clinical data from several large studies suggest the use of catheter-directed interventions for the treatment of acute proximal DVT may help reduce acute symptoms and improve quality of life. Likewise, several different catheter-directed thrombolysis (CDT) and percutaneous mechanical thrombectomy trials have shown prompt improvement in right ventricular function when treating patients with massive and/or submassive PE. Two important goals of catheter-directed interventions for DVT should be to prevent or reduce the likelihood of developing PTS and to improve quality of life.5 The primary goal of catheter-directed therapy of massive/submassive PE is to relieve right heart strain as quickly as possible and restore the patient to a hemodynamically stable condition. However, a long-term goal should also be to reduce the incidence of post-PE syndrome, chronic thromboembolic disease (CTED), and chronic thromboembolic pulmonary hypertension (CTEPH).

The mainstay of treatment for patients with VTE is anticoagulation.6 The purpose of anticoagulation is the prevention of recurrent thrombosis, embolization, and death. Advanced therapies like systemic thrombolytics (which may involve up to 100mg of r-tPA) are effective at lysing the clot but carry up to a 30% risk of bleeding, including a 2–3% risk of intracranial hemorrhage. This has led to a quest to identify treatments that carry a much better risk-benefit ratio directed more locally at the culprit thrombus without the risks of severe bleeding complications. Two broad approaches have evolved to resolve the clot: localized CDT and mechanical extraction of the clot (mechanical thrombectomy). Each approach has its own pros and cons that merit discussion.

CDT—with localized administration of lower doses of thrombolytics through catheters with multiple side holes—has been used for some time with variable success. This approach is not appropriate for patients who present with a high risk of bleeding. One variation on this CDT approach has been the addition of low-frequency ultrasound (USAT), which is purported to enhance clot lysis, based on bench-top data. When used to administer r-tPA—in a dosage of 24 mg over 12–24 hours—to patients with massive and submassive PE, it resulted in improvement in right heart function. However, the therapy was complicated by a 10% incidence of major bleed-ing.7 While this is substantially lower than the systemic therapy bleeding risk of up to 30% and intracranial hemorrhage risk of up to 3%, this still poses unacceptable risks. When lower doses of r-tPA were administered with USAT, there was still benefit in terms of reduction in right ventricular to left ventricular (RV/LV) ratio, but the reduction in clot burden was progressively lower as the r-tPA dose was decreased, in a stepwise fashion.8 USAT has been shown to be safe for the treatment of DVT.9,10 However, its benefit over standard, multi-side-hole CDT therapy remains controversial.

A retrospective study of 83 patients failed to demonstrate a clinical benefit of USAT over standard side-hole single-lumen CDT.11 More recently, a randomized controlled trial of 40 patients concluded USAT did not result in improved clot resolution in patients with DVT when the USAT was turned on versus turned off.12 Further trials are necessary to elucidate whether any short- or long-term benefit can be derived from USAT.

With regard to long-term treatment results, increasing volumes of residual thrombus is associated with higher rates of PTS, and complete clearance of thrombus may prevent moderate to severe PTS in patients with iliofemoral DVT.13,14 The challenge is how to achieve the greatest degree of clot burden reduction while optimizing perfusion.

There are a number of mechanical thrombectomy (MT) devices available, including: rheolytic thrombectomy, rotational thrombectomy, suction thrombectomy, aspiration thrombectomy, and cannula and circuit thrombectomy. These MT devices can be used to treat DVT and two devices have been cleared for the treatment of submassive PE. Some of these MT devices may also be used to administer a thrombolytic. MT therapy is often combined with a direct infusion of lytic agents into the thrombus in an attempt at rapidly clearing the thrombus in a single session. It can also be used as an adjunct after CDT if residual thrombus persists. If a patient has an absolute contraindication to fibrinolysis, MT may be used as a stand-alone therapy without the administration of thrombolytics.

While MT without thrombolytics helps reduce the risk of systemic bleeding, there are other risks related to the use of these devices that should be considered, particularly for large bore devices. These risks include damage to the vessel wall, damage to the valves inside the vessel, hemolysis, and consequent damage to the kidneys. Repeated and prolonged aspiration can lead to a high volume of blood loss, which may require a blood transfusion. While MT devices may be able to remove a significant volume of a visible clot, the clot burden in many patients is so high that the distal perfusion usu-ally remains suboptimal post-treatment.

Data from two recently approved devices for the treatment of submassive PE raises the question of whether MT alone can increase pulmonary perfusion and thereby potentially improve long-term outcomes.15,16 While both devices met the primary endpoints of their respective clinical studies, namely a reduction in RV/LV ratio of >0.20 in 48 hours, the pivotal studies reported less than 10 percent reduction in clot burden, as assessed by the Modified Miller index (MMI) at 48 hours. This is much lower than what has been reported in the CDT trials and suggests that MT devices may be effective at removing proximal thrombus but may not adequately remove distal thrombus and therefore lead to suboptimal perfusion.

A recent addition to the percutaneous devices is a pharmaco-mechanical catheter-directed thrombolysis (PMCDT) device developed by ThrombolexTM, Inc. (New Britain, PA, USA). The company has developed a platform technology around its family of Bashir® Endovascular Catheters. Since its inception in mid-2016, ThrombolexTM has received FDA clearance, via a 510(k) premarket regulatory pathway, for seven PMCDT devices. These devices are cleared for infusion of physician-specified fluids, including thrombolytics in the peripheral vasculature.

ThrombolexTM successfully completed a first-in-hu-man (FIH) trial in December 2019, treating patients with acute submassive PE. This study met its primary safety and feasibility endpoints and showed a robust reduction in right heart strain as evidenced by a mean reduction in RV/LV ratio of 37% (P<0.0009). It also showed a 37% reduction (p< 0.0005) in pulmonary clot burden as measured by MMI, following a mean infusion of only 13.7 mg of r-tPA over 8 hours. 89% of patients in this trial presented with high-risk submassive PEs. There were no major adverse events or major bleeds. The Bashir® Endovascular Catheters have demonstrated an excellent early safety profile, and ThrombolexTM has launched a pivotal single-arm, multicenter clinical study of acute submassive PE patients under an investigational device exemption (IDE) to further evaluate the safety and efficacy of this device, using less than 14 mg of r-tPA over five hours.

The mechanical action of the Bashir® Endovascular Catheter establishes multiple channels of blood flow through the thrombus, which brings the patient’s endogenous fibrinolytic into the clot. This action, coupled with the dispersion of exogenous thrombolytic across a broad, cross-sectional area of the thrombus, promotes immediate blood flow and enhances fibrinolysis. The ability to achieve robust clot resolution with very small doses of fibrinolytic, coupled with the lack of bleeding complications in the patients (both PE and DVT) treated to date with the Bashir® Endovascular Catheters, challenges the notion that the administration of small doses of thrombolytic (less than 15 mg of r-tPA) is inevitably associated with major bleeding complications. The impressive reduction in clot burden, both in PE and DVT cases, should translate into a reduction in post-PE syndrome in patients with PE and a reduction in PTS in those with DVT when treated with the Bashir® Endovascular Catheter.

There is a paucity of prospective, randomized, clinical trial data from which to draw conclusions about the use of any of these devices versus anticoagulation alone in acute VTE patients, especially concerning long-term outcomes. Physicians now have a variety of different interventional tools at their disposal. It is clear that a wide variety of devices can be used acutely to reduce the right heart strain in the setting of large PEs. It is also clear that clots can be extracted with MT devices, with varying degrees of success and risk, depending on the MT device. What is less clear is that clot extraction per se, if incomplete, will benefit the patient long-term in regards to a reduced incidence of late sequelae. “With the advent of more novel devices, such as the Bashir® Endovascular Catheter, it is likely interventional physicians will increasingly focus not just on acute procedural success but on preventing long-term complications as they consider these advanced therapies to treat their patients with acute VTE disorders,” said Marv Woodall, Chairman & CEO of Thrombolex.TM

To see The Bashir® Endovascular Catheter in action, see "A Novel Treatment Platform for VTE."