Baggies and Books: Letter from the Medical Director 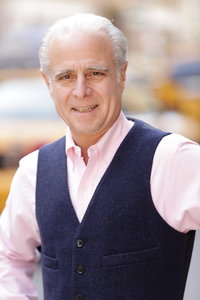 My older daughter, Erika, lives in NYC. She and my son-in-law Travis (of the famous Travis Cocktail previously written about in this column) have a large golden retriever named Madison. There is not much grass in NYC. In NYC, dogs relieve themselves on concrete. Someone’s got to pick it up. I am walking Erika’s dog with my other daughter, Mia, on the streets of New York. There is no grass to be found, and there is hardly any concrete either. Maddie does what dogs do after being in a two-bedroom apartment all day—only she does it on the street. Someone’s got to pick it up in something. That someone happened to be me. As for what would be used to pick it up, this is where the sandwich baggie comes in. I have nothing on me with which to pick up Maddie’s deposit. Unbeknownst to me, my daughters have me covered. Mia has been carrying around what Erika gave her to scoop it all up with: a very small sandwich baggie for a very large dog. Really? What were they thinking?

When I read about Bigelow Taylor and his wife, Diane Dubler, and their absurd service to the 1% of the 1%, I thought, “Really?” These people prey on the self-centered, self-aggrandizing rich who think that everyone and anyone would be the least bit interested in a coffee table book of photographs of their lavish homes. All this for a mere $200,000 for 200 copies. A bargain. Besides, I couldn’t think of 200 people that I would want to send anything to. So why do these very rich people pay this couple a lot of money to photograph their own homes and put it into a coffee table book? So they can send it to their friends and perhaps enemies (more likely)? For what? Revenge? To one-up man’s ship? Because they can? Who are these people? They don’t pick up poop on a NYC street, but I am with a little baggie.

In this issue of VEIN, we try not to fit big things into little spaces. Big ideas get enough room in this magazine. The VEITH meeting this year encompassed all aspects of vein disease in a big, comprehensive way. Highlighted are the various components with an introduction by Frank Veith. The ongoing recognition of venous disease at this meeting has grown each year.

Tom Wakefield is our featured physician. He isn’t the type of person who would subscribe to the silly service by Bigelow Taylor. Even if he had money to burn, Tom, as you will read, is a self-effacing, thoughtful person who has always tried to bring out the best in others. While the article is about him, for Tom it has never been about me, me, me. It has always been about us, us, us. Great guy and a good article. Read it.

No small baggies for Chip Draper. He addresses the big idea of how to maintain technological growth and innovation in the vein world under some current restrictions. He has been involved with many aspects of technology and innovations in both very large and small companies. Many of us take the final technological result for granted. This article brings an important issue to the forefront.

Mark Forrestal is the new ACP president; he’s been around for many changes and growth spurts in the organization. The ACP thinks big—big enough to impact change and big enough to fill up a coffee table book with notables from the specialty. Maybe that would be a more interesting coffee table book. Perhaps we should contact Bigelow Taylor for this one, just lower the cost.

Lastly, I am most encouraged by the article All Men Are Olympic Hopefuls: Compression Wear Helps. Some of our patients have questions about the use of compression to enhance performance and/or recovery. This article picks up the various pieces of data on the subject and fits it into a nice package—sort of what I was trying to do as I bent down to pick up Maddie’s production.

I call Erika and ask her what she was thinking when she gave Mia this very small sandwich bag for this very large dog. It turns out that she wasn’t thinking of this at all. She was thinking about an article she had read about very rich people who had nothing better to do than have a photographer and his wife take pictures of their homes to put into a book for other people to see. She couldn’t be bothered with furnishing a large, sturdy plastic bag to her father to pick up certain things that exit from a large dog on a NYC street while being surrounded by many people. Can’t sweep it under the rug. When it all didn’t fit into that small baggie, Mia smiled and produced an even smaller, used bag that had held a pair of Gap socks for my 3-year-old granddaughter, Lily. Just the right size for the leftovers.

In VEIN, we also strive for no leftovers. On the way back to Erika’s, I prayed that Maddie had gotten it all out, as there were no bags left. She stops one more time. Squats down. My heart is racing. I was ready to leave the excrement right there on the street and make a run for it before the Poop Police arrived. A trickle of yellow appears. Now, in addition to Maddie, I am relieved as well.