Third Base or Right Field? A Juxtaposition of Positions

I don’t particularly care for baseball or baseball analogies, but this one may work. I do understand what the pseudo baseball intellectuals like about a game that is driven by statistics and subtle strategies, but an athletic contest without a time limit? Really? Who can plan anything when watching a baseball game? Paul Krugman, the economist writing in the New York Times, described Donald Trump as being born on third base. Interesting image: a little baby residing on third base.

I was born in Brooklyn; Daniel Justus was born in Buchanan County, southwest Virginia, coal country, Appalachians. You get it? Justus was born in right field. Many of us can remember right field when we were incarcerated in Little League by our parents. It is below Purgatory; I am sure it fits into one of Dante’s Seven Circles of Hell. You never wanted to be banished to right field, where nothing ever happened except boredom or the desire to disappear into oblivion. Your parents would beg for forgiveness and wonder what sin they committed to have you sent to right field.

The worlds of Daniel Justus and Donald Trump surreptitiously synthesized on a flight back from my privileged annual trip to the LIVE Vascular Meeting in Greece. With not all that much to do at 38,000 feet except eat, drink and be merry like Robin Hood and his men in Sherwood Forest, I started to read the International New York Times and the Financial Times’ London weekend edition. Krugman’s scathing editorial about Donald Trump for the NY Times, and Edward Luce’s article about Daniel Justus for the Financial Times, melded in cataclysmic irony. The haves and the have-nots inexplicably joined for a moment in time in my mind. 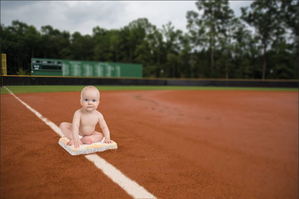 As Krugman wrote, “Remember too, that Mr. Trump is a clear case of someone born on third base who imagines that he actually hit a triple.” Trump inherited a lot of money and influence from his successful father; Daniel Justus was born in Virginia coal country with little expectation of ever getting out of this economic and social right field—but he did.

With the help of supportive parents and his own will, he recently graduated from the University of Virginia. He speaks Spanish and Mandarin Chinese. He is an interpreter for the state of Virginia and works for a Chinese law firm in Shanghai. He has hit a home run, but he started in right field. Or worse. This is to be admired.

In the vein world, we all come from different positions, and most of us not from third base. As an eight year old, right field seemed to be my position. As a vein specialist, I am finally out of right field. Most of us are not in right field; most of us have not yet hit a home run. Most of us are somewhere between Daniel Justus and Donald Trump. In VEIN this month, we seek to get you closer to home, or at least third base.

This issue, Maria Urso gets us closer to home in her article, entitled “Effective Vascular Interventions,” by elucidating how we should be looking at data and reported outcomes. There are many ways to interpret data and results, and she gives us a sobering way of approaching this. Maria began her journey closer to third base than most of us.

If you think Mike Dalsing has seen it all, you are correct. He started in right field and worked his way to third base—and beyond. A person to be admired for his accomplishments and subtle self-confidence—attributes that would benefit many in the vein world if they took his lead and emulated his self-deprecation.

The Expert Venous Management course (EVM) held at Englewood Hospital every June has spawned many a vein specialist to elevate their care of the vein patient. The case presentation by Edgar Guzman, and the comments by Thom Rooke (one of the smartest people in the room), are very illustrative of the level of complexity covered during this meeting. Come next year. Another course that has recently been gaining some momentum is the HOT course, which fills the void for many neophyte vein care practitioners in the world of venous imaging. Read the article.

And now we arrive at the bottom of the 9th inning with two men on base and two outs. We need to highlight the mentors and pioneers in our world of veins. A number of articles in this issue of VEIN are written by, written about, or involve those who were there before most of us. The article entitled, “The Pledge,” involves the concept of stemming the tide of inappropriate or fringe vein care. This is written by Dan Monahan, Elna Masuda, and a giant among us who has seen it all and influenced most of us directly or indirectly: Bob Kistner. Nick Morrison is the first American to be the president of the UIP. Like Mike Dalsing, he started far away from third base, maybe even right field. But he has done it all and has given us a very complete, yet succinct article discussing the goals of the UIP and its global impact on venous disease.

Finally, the history of vein care would not be complete without the recognition and story of one of the pioneers in venous disease who has remained somewhat anonymous. For whatever reasons, Syde “Abe” Taheri is not a well-known name in our specialty. I hope my article, which begins our series about “Mentors Who Made Me,” sheds some light on the early developments in our world of veins.

Now, I don’t wear lipstick usually, but this article almost made me go out and buy some Ruby Woo. Apparently, Ruby Woo lipstick is distributed by MAC cosmetics. It is timeless. It could have been worn by Bette Davis in All About Eve, but she didn’t wear it. Why am I intrigued by Ruby Woo lipstick? Because obsession with perfection is what many vein specialists have. Anyone at any age can wear Ruby Woo, or as Kathleen Baird-Murray writes in her article for the Financial Times, “Ruby Woo transcends age.

It has a youthful vibe, but you can imagine an older woman carrying it off too.” Sounds like the management of vein disease: not just for the young, not just for the old, but for all. Get some Ruby Woo. Get yourself this issue of VEIN. Get to third base. Not necessarily in that order. Maybe read VEIN while standing on third base wearing Ruby Woo and speaking either Spanish or Mandarin Chinese. Have fun trying.